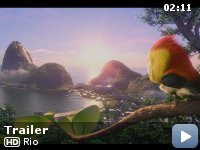 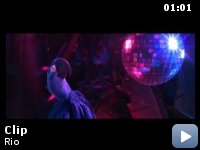 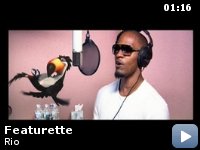 When Blu, a domesticated macaw from small-town Minnesota, meets the fiercely independent Jewel, he takes off on an adventure to Rio de Janeiro with this bird of his dreams.

Storyline
In Rio de Janeiro, baby macaw, Blu, is captured by dealers and smuggled to the USA. While driving through Moose Lake, Minnesota, the truck that is transporting Blu accidentally drops Blu's box on the road. A girl, Linda, finds the bird and raises him with love. Fifteen years later, Blu is a domesticated and intelligent bird that does not fly and lives a comfortable life with bookshop owner Linda. Out of the blue, clumsy Brazilian ornithologist, Tulio, visits Linda and explains that Blu is the last male of his species, and he has a female called Jewel in Rio de Janeiro. He invites Linda to bring Blu to Rio so that he and Jewel can save their species. Linda travels with Blu and Tulio to Rio de Janeiro and they leave Blu and Jewel in a large cage in the institute where Tulio works. While they are having dinner, smugglers break into the institute and steal Blu and Jewel to sell them. Linda and Tulio look everywhere for Blu…

Alice (The Other Goose)

The user name on Linda's computer is "Bluebird".

Factual errors:
Police cars in Rio De Janeiro are not numbered by just 5 digits. They consist of two digits followed by a dash followed by four digits (for example 12-1234).

Blu:
[Linda places his hot chocolate in front of him]
Ah! This is the life. The perfect marshmallow-to-cocoa ratio.
[counting the marshmallows]

Blu:
One, two, three, four, five
[another marshmallow floats to the surface]


"Oh, how wish I was back in my cage, with my mirror, and my little
bell"

Jesse Eisenberg should be forever grateful that the Oscar-nominated
"The Social Network" was released before Rio. That's because his voice
as Blu, the macaw, is so distinctive and perfect, that in my mind he
will always be Blu. And if Rio had been released months ago, audiences
worldwide would think that Mark Zuckerberg, the Facebook founder,
missed his cage, mirror and little bell.

Now, for the movie itself…

Location, location, location. Because what's Rio, the movie, without
(pulsating, colorful, exuberant, romantic) Rio, the city? The story is
delightful, though predictable. The characters are cardboard, even if
3D and feathery. But "predictable" and "cardboard" are the worst
adjectives I could possibly link to Rio. The Rio deal, is that I
laughed all the way through it, like everybody else in the theater.

Blu, the last male of his kind, is the happiest macaw, out there in a
snowy town with Linda, his nerdy owner. Jewel, the last female of her
kind, lives in Brazil, and is the saddest macaw, imprisoned in a cage
and fighting for her freedom. She's a free-spirited soul, with the
world at her feet. Blu has lived a sheltered life, can't fly, and loves
every minute of it. What happens when they meet? Anyone above the age
of 7 can guess how it ends (age 5 if he's seen the trailer). But
there's so much delight from the first minute to the last, that you
don't want it to end.

I was one of the lucky few to watch the premiere of Rio in Rio, and at
this point I can hardly wait to see it again. A Brazilian, Carlos
Saldanha, directed the movie, and it shows. The details of the city are
all there, but so is the big picture (you know, everything that really
matters, along with wide panoramas of Rio by night, of a crowded beach,
of a sunset in the cable cars of Santa Teresa).

Lots of AMAZING aerial views in the action scenes. The main characters
are birds, thus flying should be expected. Many of those places showed
in the movie can be visited by tourists.

Rio doesn't have the depth of stories such as Toy Story or Up. It is a
simpler plot. It is, however, pure fun from start to finish, and
visually stunning. Location, location, location. As a native of Rio, I
could recognize most places, and was stunned with how realistic were
the slums, and how the geography of the city, especially the mountains,
could be so painstakingly reproduced.

The movie is not a musical, but it comes close to it. There's funk,
bossa nova, a few clichés of Brazilian music and even samba sang in
English (still conflicted about it!).

There is also the portrayal of animal trafficking, a centuries-old
problem in Brazil, and the subplot of a boy who lives on the streets
and must resort to petty crime, which adds up to a much-needed social
commentary.

By all means, don't miss this movie!