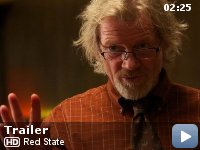 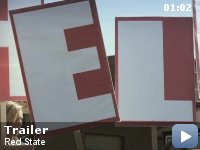 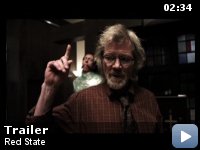 Set in Middle America, a group of teens receive an online invitation for sex, though they soon encounter fundamentalists with a much more sinister agenda.

Storyline
Set in Middle America, a group of teens receive an online invitation for sex, though they soon encounter fundamentalists with a much more sinister agenda.

Taglines:
An unlikely film from that Kevin Smith

During filming Kyle Gallner suffered a panic attack whilst being tied to a cross, which the crew were unaware of at first, thinking he was still acting.

Plot holes:
(At 1:01) When the young girl is talking the teenage boy, she essentially recites the conversation that John Goodmans character has with his boss and subordinate, which she was not privy to.


I had the honor of seeing a screening of Red State last night at Laser
Pacific in Hollywood as part of the Red State of the Union film school
program Kevin Smith held.

Prior to going in, I refused to read any of the Sundance screening
reviews of the film because I wanted to avoid spoilers and go in with a
fresh experience. I had high expectations and I was not disappointed.

The film begins with sort of the stereotypical horror movie formula,
teenagers go out looking for sex and find themselves staring death in
the face. However, what happens to them in Red State is a far departure
from your standard Jason or Michael Myers flick. The film is hardly a
stereotypical horror movie. In fact, Kevin Smith deliberately goes out
of his way in this film to keep it far from the typical story arch and
structure of most studio movies. Just when you think you know what is
going to happen next, Smith hits you with another twist and surprise.
This film is completely unpredictable and unforgiving of its
characters.

I must congratulate Mr. Smith on the exceptional camera-work and
editing in this picture. This is by far the best looking Kevin Smith
movie to date. The constant use of hand held cameras and creative
cutting, keeps you on the edge of your seat the entire time. I think a
fair comparison would be Rob Zombie's "The Devil's Rejects" or parts of
the original "Texas Chainsaw Massacre". Also, the film has no musical
underscore. It uses ambiance and sound effects in place which works
beautifully for this film. Most films use music to enhance the mood and
make you feel a certain way. In this film, you can tell Kevin Smith
doesn't care how you feel and wants you to just sit there and take it.

The cast is also spectacular. Michael Parks steals the show. Also John
Goodman delivers the goods and has a lot more screen time than the
teaser trailer suggests.

All in all, I think this film is one of the best films I have seen in
the last few years. With everything being computer generated these
days, it refreshing to see a small practical film like this which still
holds as much power as one of the big boy studio flicks. And for those
of you worrying about the political or religious messages, there aren't
any. This movie does not preach religious views to you nor does it take
any kind of political side. Its plain and simple. This is just a horror
movie about a family of psychos. The fact that they are religious just
adds to the terror.

The movie also features one of the best endings ever.