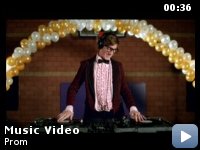 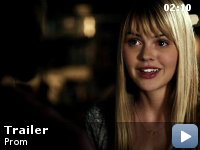 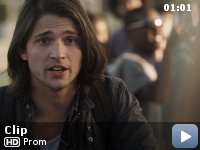 A group of teenagers get ready for their high school prom.

Storyline
Prom and high school graduation are approaching for a group of seniors, but when the prom decorations are destroyed in an act of school vandalism, the class president is left scrambling. With everybody else pre-occupied with finding dates and dresses, Nova is left to rely on the principal forcing the school rebel to help her out. But when he's there for her when she needs it, she starts looking at him in a different light.

Continuity:
Near the beginning Jesse goes into the principal's office. Before he goes in he has a "five o'clock" beard shadow, but when he is in the office he doesn't have the beard.

A fairy tale ending for teenagers


So I'm sure a lot of people saw this from the trailer, but Prom is a
classic Disney spin on a very big moment in a teenager's life. Yes this
movie is a preteen/early teen's dream about the life and drama involved
in asking someone out for prom and the plans that go in it.

To star off on this review Prom centers on about five different
scenarios all wrapped up into one movie. The scenarios are a romance
story between the class president and a ruffian, another love story
between a dweeb and a beautiful sophomore, a small side story about a
guy trying to get someone to come to a prom, another story of deceit
and betrayal, and finally a story about an ideal relationship hitting a
rocky course. I know sounds like a soap opera doesn't it, and in fact I
would call this movie a teenage soap opera. The story lines in my
opinion were predictable, very linear, and felt similar to a plot found
in most Glee episodes. The dialog in this movie was not strong enough
to keep the story interesting as well, as it was more juvenile and not
really deep. However, from the trailers this is what I was expecting
would be the case and thus am not too shocked by it.

Despite the poor main story line and the intense drama from others I
enjoyed the brief interludes present throughout the movie that involved
the unknown loser Lloyd and his quest to ask a girl out. These funny,
although weak, scenes gave the film a little more pace and took away
from the drawn out drama. The other story was the sophomore geek Lucas
and his quest to impress the lovely Simone while ditching his best
friend. This story was also weak and predictable, but the acting was
done well enough that I was dragged into feeling sorry for him. In fact
I could even see some qualities of myself in Lucas, which is probably
why I was interested in this story.

So what else is there to say about this movie? Well the acting is not
bad, and although young, these actors are already showing potential for
being good actors. However, most audience members may be caught up in
the dramatic actions these teens do in the movie. However, I believe
the teenage girls will be focused more on the sulky, pouty, and rebel
nature of the main dude and will be making various sounds that
represent their attraction to the man. At least that was what I saw
when I saw this movie. Another thing is that the soundtrack is very
mainstream radio with songs from All Star Weekend, Taio Cruz, and yes
even Katy Perry being played throughout the movie. It adds zest to the
film and makes one feel like they are in prom, but if you're not a fan
of mainstream radio then you will not enjoy it. The camera work is nice
too, and the setting does actually feel like a high school setting so
that's another thing I find positive. However this movie was also like
being in high school musical, except get rid of the singing and dancing
and instead replace it with Twilight qualities.

To wrap this up, Prom is a movie that will make teenage girls go gaga
and laugh at almost every scene. If they are not laughing, then there
is a good chance that they will be swooning over the guy leads in this
movie or awing at the cuteness this movie does have. As I have
mentioned before the dialog is weak, the story is predictable, and the
pace can be a little slow and boring at times. However, it is a cute,
high school soap opera that will entertain those that like to see happy
endings and smiles. This is also a movie that could be good for a date
as well. Regardless looking at this movie for what it is I will give it
a 7, but that's being a little generous. Until then enjoy and please
email me if you have any ideas to improve my writing at
rgkarim@mail.roanoke.edu