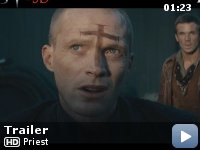 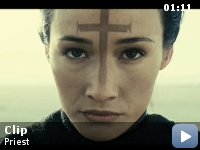 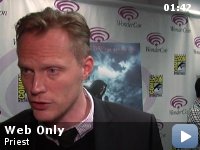 A priest disobeys church law to track down the vampires who kidnapped his niece.

Storyline
PRIEST, a post-apocalyptic sci-fi thriller, is set in an alternate world — one ravaged by centuries of war between man and vampires. The story revolves around a legendary Warrior Priest from the last Vampire War who now lives in obscurity among the other downtrodden human inhabitants in walled-in dystopian cities ruled by the Church. When his niece is abducted by a murderous pack of vampires, Priest breaks his sacred vows to venture out on a quest to find her before they turn her into one of them. He is joined on his crusade by his niece's boyfriend, a trigger-fingered young wasteland sheriff, and a former Warrior Priestess who possesses otherworldly fighting skills.

Taglines:
The War is Eternal. His Mission is Just the Beginning.

Continuity:
When Lucy enters the outpost, she passes the mirror and closes the button on her dress. However when she turns back to the table and sits down the button is open again. Then when she stands close to the wall during the attack, the button is closed again.

Priest:
[Hicks has finally grown a pair and saves Priest's life]
You would have made a good priest.

Priest:
[Small pause]
Don't let it go to your head!


Based on the long-running Korean comic of the same name, Priest is one
of those films that's been stuck in development hell for the last few
years, running a gauntlet of director and lead actor changes and more
recently, coping with a series of release date delays in order to
facilitate the inevitably shoddy post-production conversion to 3D
that's currently so beloved of mainstream cinema.


The added dimension isn't going to win any prizes – for the most part
it is relatively pointless, and the world in which Priest takes place
is not interesting enough to require any additional depth.

The ever-reliable Paul Bettany stars as the titular character. Stoic to
the end, he's not your typical priest – more a deadly weapon,
specialising in martial arts and weapons skills that make him the
perfect killer. He exists in a time where vampires are a horrifying
reality, battling humans for control of a conflict-ridden, barren
wasteland punctuated only by large, soulless, church-controlled cities
where humans live only for their faith and 'an honest day's labour'.

You don't watch films like this expecting an Oscar-winning tale, and
action-wise, Priest is fairly solid, packing in a series of high-octane
fights and chases for its duration. Helmer Scott Stewart knows where to
put a camera in order to maximise the impact upon the viewer, and the
oil-slick manner in which everything is filmed shows a director moving
away from his previous field as a visual effects specialist and having
a decent stab at mastering his craft.

Unfortunately, there's not a lot going on when knives and bullets
aren't being flung around – the supporting cast of Cam Gigandet, Maggie
Q and Karl Urban are given next to nothing to do and the dialogue
serves only to move the film along to its next set-piece. Story-wise,
it's paper-thin, and it's difficult to care about the motivation of any
character when the levels of emotion on display resemble that of Mount
Rushmore.

It is also strangely edited – 87 minutes is very short for a film with
this kind of budget, and there's all manner of blunt cuts that give
credence to the theory that there was once a longer, potentially better
film here.

So, was Priest worth the wait? Not particularly, but for all its
faults, it certainly has promise. Depending on box office performance,
it could really benefit from a deeper, beefed-up sequel along the lines
of Blade II. The good news is that there's plenty of source material
available for a return to this mythology – it's just a shame that it's
as shallow as the film it's spawned.

TagsUSA
Hobo with a Shotgun
The Tree of Life