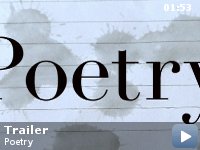 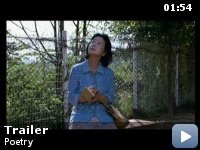 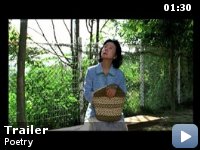 A sixty-something woman, faced with the discovery of a heinous family crime and in the early stages of Alzheimer's disease, finds strength and purpose when she enrolls in a poetry class.

Storyline
A sixty-something woman, faced with the discovery of a heinous family crime and in the early stages of Alzheimer's disease, finds strength and purpose when she enrolls in a poetry class.


In recent weeks five teenagers have killed themselves as a result of
bullying. A new poll has indicated that slightly more than a third of
teens in the U.S. personally have been subjected to bullying behavior.
In the poll, more than two-thirds of teens also said their friends
about been bullied. Yet a majority of adults, according to the poll,
believe bullying is a minor problem or not a problem at all. In the
macho society we live in and tolerate, women are even more likely to be
victims than men. In Lee Chang-dong's latest film Poetry, winner of the
award for Best Screenplay at the Cannes Film Festival, a young girl
commits suicide after being repeatedly raped by a group of juveniles.
Sadly, the fathers of the other boys are only interested in protecting
their sons from prosecution, silencing the press and school officials,
and collecting enough money to pay off the girl's mother.


Like Secret Sunshine, Poetry revolves around a woman mourning the death
of a child, although here it is not her own. The idea for the film had
its origin in a true case where a small town schoolgirl had been raped
by a gang of teenage boys. In contrast to the grandmother in
Bong-Joon-ho's Mother who refused to believe her son was responsible
for a murder, Mija, a 66-year old played by Yung Jungee in her first
role in 16 years, learns from the fathers of the other boys that her
16-year old grandson Wook (Lee Da-wit) was one of the six people
involved in the rape and wishes to pursue justice. Though Mija
privately knows that it is more important for the boys including her
own to acknowledge their role in the crime, living in the
male-dominated middle class Korean society, she reluctantly tries to
raise her share of the payoff money, but expresses her feelings in not
wanting to participate by the look on her face and by abruptly walking
out of meetings.

Rebelling against society's norms comes naturally to Lee's characters
even though they have suffered a terrible loss or, in the case of Mija,
is beginning to suffer the effects of encroaching dementia. Always
dressed in flowery clothes and looking cheerful, Mija takes care of
Wook in the absence of his mother who is divorced and living in Pusan
and she supports herself by taking care of a stroke-ridden elderly man.
Unfortunately, Wook spends most of his time on his computer or cell
phone and there is little communication between grandmother and
grandson. Aside from screaming at Wook, "Why did you do it?" Mija does
not attempt to engage in conversation with the boy about treating
others with civility and respect, nor apparently do the fathers of the
other boys talk to their sons about their atrocious behavior.

After seeing a poster that reminds her that one of her teachers once
told her that she had a vein for poetry, Mija, on a whim, enrolls in a
poetry class and the film follows her attempt to write a single poem
before the class ends. Some of the most affecting scenes in the film
are the discussions in the poetry class led by their teacher who tells
them poetry does not require a special time or place or even
inspiration, it only requires seeing the world as if for the first time
and asks the class to share their memory of the most beautiful time in
their life. Another poignant moment is when Mija meets the mother of
the deceased girl (Park Myeong-sin) in a field and establishes a
relationship based on the world that they see around them, even though
she neglects to ask her if she would accept a cash settlement, the
reason she went to visit her.

Lamenting the fact that poetry is a dying art, Lee challenges us to see
the beauty and the transcendence beyond the pain of the modern world.
Speaking at a press conference, he said, "Poetry is not just like a
bouquet of flowers that is beautiful in itself," he says. "It is life.
No matter the ugliness of the world, there's always something beautiful
inside. That's what I wanted to show." Lee succeeds in showing us the
beauty beneath the ugliness and the fact that regardless of our age or
circumstances, we have the ability to transform our lives. Yet the
question must be raised – would not Mija have made more of a difference
if she had engaged in a quiet conversation with her morally-challenged
grandson about knowing why it is wrong to be reckless with the lives of
others than in waxing poetic about flowers and fruits, or even life and
death?