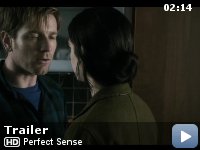 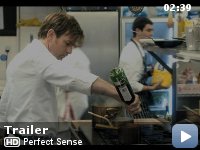 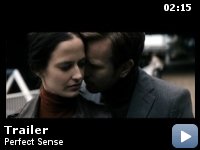 A chef and a scientist fall in love as an epidemic begins to rob people of their sensory perceptions.

Storyline
A chef and a scientist fall in love as an epidemic begins to rob people of their sensory perceptions.

Taglines:
Without love there is nothing.

Denis Lawson (Detective) is the uncle of Ewan McGregor (Michael) in real life.

Susan:
All beyond fat and flour…


When I read the synopsis for _Perfect Sense_, I was expecting an
apocalyptic romance. I was wrong. Such a description is too neat. This
is more than escapist entertainment. It is an experience to be savored.

Its story is deceptively simple. It weaves a richer fabric than any
casual touch will detect. Those who think its central device capricious
(the disease and its development) give themselves too much credit for
discerning the logic of their own lives. An illness may seem to follow
no obvious or satisfying plot, but who can say whether any "misfortune"
fails to follow a narrative too subtle for the prejudice of those who
feel injured by it? Those who require every story to have a tidy,
forensic resolution, with an indictable perpetrator for every ordeal,
on whom they can unleash their outrage in order to achieve "closure,"
are the victims of their own narrow interpretation. Most pain is not
conspiracy. The shared affliction of this story is poetic metaphor;
however, like most good art, this film is about its characters, not its
literary devices.

The cast's performances are not only authentic, they are illuminating;
particularly Ewan McGregor's and Eva Green's central couple. Were they
mere victims, their story would be hopeless tragedy. Instead, theirs is
the account of an ordinary and vulnerable man and woman with
extraordinary resilience, who attack, then embrace each other,
stumbling over their circumstances as they learn to transcend them.

If those at the premiere who asked questions after the screening
(during the Q&A) are a representative sample of the audience, few of
Mr. Mackenzie's viewers got the "point" of his film. One person asked
the director what message or meaning he hoped we, his audience, would
take from his film. He looked nonplussed at this question. He responded
that the viewer had to answer that for himself.

It seems that Mr./Ms. ArizWldcat was one of those who expected this
film to be easily categorized and to reaffirm a specific,
pre-determined view of the world, such as a feel-good romance or a
psychological thriller. The guy gets the girl and they save the world
in the process, all portrayed through a predictably formulaic sequence
of events. Everyone lives happily ever after. By those prerequisites,
we would also be forced to give _Hamlet_ or _Citizen Kane_ one out of
ten stars.

_Perfect Sense_ is a film whose "point" is not to make its audience
comfortable or to provide the adrenaline buzz of a "thriller." Its
purpose is to portray authentic human experience in an impossible
situation. It did so admirably. It is one of the most hopeful films I
have ever seen.