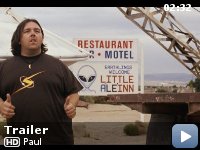 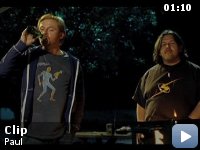 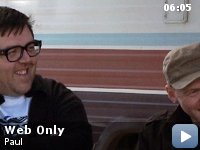 Two British comic-book geeks traveling across the U.S. encounter an alien outside Area 51.

Storyline
Two sci-fi geeks take a pilgrimage to America's UFO heartland. While there, they accidentally meet an alien who brings them on an insane road trip that alters their universe forever. For the past 60 years, an alien named Paul (voiced by

Simon Pegg and Nick Frost came up with the concept for Paul while waiting out a rainstorm on the set of
Shaun of the Dead. They handed producer Nira Park a sketch drawing of Paul wearing an FBI T-shirt, flipping-off the viewer, with a caption that read, "In the U.S., everybody is an alien." The actual drawing can be seen during the closing credits.

Factual errors:
While riding for the first time in the RV, Paul states that the car accident was due to his not being able to reach the pedals, and that he therefore "needed to use the parking brake". The parking brake on the Crown Vic is a pedal located to the far left. There is no lever-operated parking brake.

Young Tara:
[referring to her dog]
Go on, then, Paul. Don't be long.

RUN to the theatres to see this one!


We saw it tonight with about 30 friends at a pre-release screening in
Atlanta.

Let me say I am a 50-yr-old female film-lover. Sci fi is not my
favorite genre, but I have seen most of the sci fi classics.

I didn't know what to expect as I am not always a sci-fi comedy fan.
For instance, although mildly entertaining, I wasn't wild about
"Hitchhikers Guide to the Galaxy". I was wild about some of the cast
members, but not really the film.

So, we arrived and the theatre was packed. They were turning people
away at the door. Although I had qualms and wasn't sure I'd like it, it
turns out I LOVED it! ALL of the audience members seemed to laugh
themselves in to hysterics through much of the film. And the ENTIRE
AUDIENCE CLAPPED WILDLY AT THE END!

WARNING: This movie is NOT for the devoutly religious or for those who
are offended by swearing and sexual references. Period. If you THINK
you might be offended by anti-religion humor, swearing, or sexual
references, then don't go. And I would recommend it for older teens
only; NOT young teens.

Amazingly, during the first 20 minutes or so, I found myself thinking
'This is delightful! If only they could keep it THIS funny for the rest
of the film….. so many comedies start out with a bang and then are
just "tired" by the end of the movie…..'

But I couldn't have been more wrong. It not only kept up a wonderful
pace, but introduced many great characters along the way.

If you enjoyed "Shaun of the Dead" and "Hot Fuzz", this will be right
up your alley. There were lots of sci fi movie references (Alien, ET,
Close Encounters of the 3rd Kind, Star Wars, Aliens, Predator, etc.) It
had an AWESOME cast, MARVELOUS character development, and a terrific
script that went from sweet and moving, to hilarious, to scary, and
back. It was really SO MUCH FUN!

It is lewd, it will certainly will be offensive to some American
Christians, and it is totally sci-fi, but it's absolutely hilarious.
So, you sci-fi comedy lovers, GO!! RUN to the theatre to see it on the
big screen. Take friends and enjoy, enjoy, enjoy!