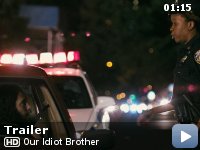 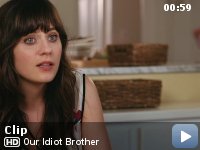 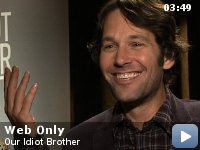 A comedy centered on an idealist who barges into the lives of his three sisters.

Storyline
Ned lived a happy life growing organic vegetables on a farm with his hippie girlfriend and his dog named Willie Nelson, but an unadvised incident with marijuana at a farmer's market lands him in jail. When he gets out of jail, he is off to live with his sisters. While Ned is still happy, his sisters are much less so after he manages to screw up one marriage, one job opportunity, one budding relationship and one domestic partnership. He sees those problems as breakdowns in communication, but his sisters see him as an idiot.

Ned introduces River, Dylan's (Steve Coogan's) son to the movie
The Pink Panther, starring Peter Sellers. Steve Coogan has been likened to the late Peter Sellers for his versatile character portrayals, range of voices and gift for mimicry.

Revealing mistakes:
Close to the end of the film when Ned (Paul Rudd) and his friend have opened up a candle-store, his friend is dipping candles into obviously empty containers, since they come out as dry as when they go in, and in many shots you can see the jars being empty of candle mass.

Jeremy:
[Referring to Ned not being able to go through with a 3-way with a man and a woman]
Just because you're straight doesn't mean you're homophobic.

Ned:
[Feeling ashamed of himself]
I don't know, maybe I should have tried harder.


A hilarious movie written for Paul Rudd: what more could we want?

Rudd plays Ned, a stoner who has frizzled his neurons to the point that
he has lost any ability to detect or dish out B.S. The poster child for
what it means to be ingenuous, Ned is a trusting, playful, adorable
stray puppy who isn't quite housebroken. So you-know-what hits the fan
when his three sisters serially take him in after his release from
jail. He's nothing but tsuris. It's no wonder that his most enduring
relationship is with his dog, Willie Nelson.

Thanks to Rudd's everyman persona and the genial obliviousness he
brings to Ned, you can't help but feel empathy. As with a suspense film
where the audience knows what's going to happen but the characters are
still in the dark, you want to yell out to warn Ned before he screws up
again. His perfect comic timing and the made-to-order script make sure
you get the most laughs from his predicament. Luckily, there's more to
him than just bad luck. He's also an endearing white angel on the
shoulders of his sisters, helping them fight their devils as he becomes
an unwitting catalyst for change.

The film is smartly directed by Jesse Peretz from a story he developed
with his sister, Evgenia Peretz. I saw this at the Sundance screening
in Brookline, Massachusetts, where director Peretz said they wrote it
for Rudd, whom he clearly enjoys working with, and who wouldn't? Even
though they stuck to the script, Rudd improvised at least two of the
movie's funniest bits.

A fun ride throughout, the film only has a couple of weak spots. One
scene has Ned comfortably telling a white lie, something so out of
character it was jolting to the point of distraction. The ending could
use some reshaping, and perhaps it might get some before general
release. But even as is, this movie is about as charming and hilarious
as Rudd can be, which is quite sizable.

TagsUSA
Conan the Barbarian
The Debt