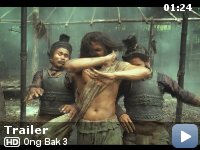 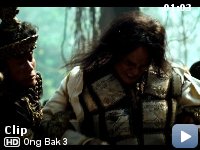 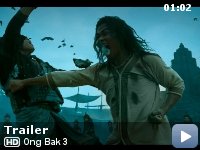 Ong Bak 3 picks up where Ong Bak 2 had left off. Tien is captured and almost beaten to death before he is saved and brought back to the Kana Khone villagers…

Storyline
Ong Bak 3 picks up where Ong Bak 2 had left off. Tien is captured and almost beaten to death before he is saved and brought back to the Kana Khone villagers. There he is taught meditation and how to deal with his Karma, but very soon his arch rival returns challenging Tien for a final duel.

Mhen:
[lifts rope onto the guard's groin]
Must have broken his balls.


Picking up directly where we last left off in that cliffhanger ending
in Part 2 after an opening credits montage to quickly jog our memory,
we see how Tien gets systematically broken down by the many minions of
his nemesis Lord Rajasena (Sarunyoo Wongkrachang). Here's where I think
the Thai audience have the last laugh with their recent censor ratings.
Ong Bak 3 is rating an 18+ there, and over here, we got by with an
NC16. Not so bad I thought to myself, until the first 5 minutes saw a
number of badly executed butchering of the film, that I balked. We
should have gone M18 to be in line, and perhaps those torture scenes
would have survived the censors scissors. But no thanks to the
distributors who decided to try and make this film appeal to a larger
Jaa audience. Surprisingly though the more violent moments later on in
the film were left untouched, scenes that I felt were violent enough
with the likes of a decapitation, and face/head stomp to warrant an axe
under the NC16 rating. But I guess I'm not a censor.


Anyway, action fans may feel a little bit disappointed with this
installment which ran just over 90 minutes. For the first hour we only
have limited battle sequences involving our hero, so savour whatever
you can in his fight for survival against hordes of weapon wielding
enemies who have the unfair advantage of strength in numbers against a
badly beaten (just came off those numerous fights from Ong Bak 2) Tien.
Totally broken and just as he's about to be executed, Tien gets saved
by the bell and brought back to the village of Kana Khone, where
another fight ensues involving his new rescuers against Rajasena's
assassins.

Then it's a good plod onto the hour mark, where Tien goes through a
reincarnation of sorts, involving body wraps, mystical chants, Master
Bua (Nirut Sirichanya) turning to monkhood and imparting pearls of
wisdom, the rehabilitation of body, mind and soul, time for romance
with Pim (Primorata Dejudom) his pillar of strength, discussions of
karmic philosophy and the circle of life. Tien has to unlearn what he
has learnt, and basically has to snap all the bones of his body back in
place before he can practice martial arts again, which brings us a
bearded Jaa and a training montage in a tree, under water, showing off
a lean though scarred body, and is that a little paunch I see as well?

So while Tien takes a breather of sorts for his transformation, the
duty of keeping the action junkies entertained fell on Dan Chupong's
shoulders, as his very short supporting role as the Crow Ghost got
expanded here, with his motivation fully revealed. His character soars
to evil heights here, taking over the mantle as chief villain, and
allowing Chupong to reintroduce himself as an action star to be
reckoned with in his own right. Those who have seen Born to Fight and
Dynamite Warrior will know what he is capable of, and I really salute
him for daring to take on a negative role just to spar with Jaa on
screen.

But what a letdown when they finally get together to do battle. Overall
I found their sparring quite weak compared to what had been done
earlier in the film involving other exponents, and the finishing blow
was quite a letdown. Already the number of fights and spars here were
limited to begin with, one even involving the architecture of the mind
(sorry, Inception still fresh), and this one just didn't pack enough
oomph. It's built up to be something like Tien being a Moses to lead
his people, captive by the Crow to be slaves getting constantly
whipped, back to their promised land, and hey, he even comes with a
staff that got dropped off after a magical moment got executed, in time
for fisticuffs.

The only positive coming out from this new Tien, is his new fighting
ability. Tien is now more graceful, thanks to the fusion of dance to
his moves, and the many moments when this parallel that dance brings to
the table, got heavy emphasis, meshing what we usually think of as
effeminate, to giving that suppleness to the more masculine moves
involving elbows and knees to bone-crunching effect. This to-the-point
moves were not forgotten of course, and come in the form of very
economical, sometimes comical, but always simple, strikes involving
forearms and a rigid body trained to be as hard as steel. I still miss
those drunken fists moves from the earlier film, and the insanely
choreographed finale battles then, which this one had tried to emulate,
only to be a pale shadow of its former's glory.

Comedian Petchtai Wongkamiao provided some comic relief in a film that
took itself quite seriously, and I think in light of some of the themes
that were handled in quite a verbose manner, this was much appreciated.
Ong Bak 3 straddles martial arts and philosophy very openly and tried
to strike a fair balance between the two, but alas it came off as quite
a schizophrenic film very much like True Legend in spirit. I hope the
Ong Bak 2 and 3 episodes don't tank Tony Jaa's career, because I'm sure
he has enough in reserve to wow audiences once again, should the right
story come along that pushes his physical boundaries.

Incendies
I Spit on Your Grave