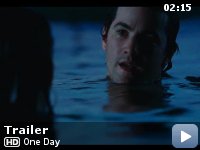 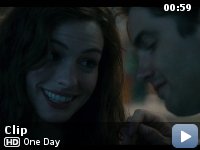 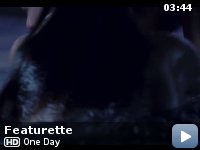 After spending the night together on the night of their college graduation Dexter and Em are shown each year on the same date to see where they are in their lives. They are sometimes together, sometimes not, on that day.

Storyline
Emma and Dexter meet on the night of their university graduation. We see them every year on the anniversary of that date – July 15th. Emma is smart but success doesn't come quickly for her, whereas for Dexter, success and women come very easily. Through the years they grow apart as their lives take different directions and they meet other people. But as they grow apart from those other people and their lives start taking opposite directions again, Emma and Dexter find that they belong with each other.

When Emma and Dexter are on the nudist beach, she is reading "The Unbearable Lightness of Being" by Milan Kundera. The story line of One Day has several parallels to this novel.

Anachronisms:
On 15 July 2000, Dexter and Emma meet again at Colin's wedding in London. Dexter takes Emma outside onto the roof, overlooking St Paul's cathedral. In the background you can see two skyscrapers. One of these is the Heron Tower, which wasn't completed until late 2010, having not even been granted planning approval until mid-2002.

Dexter:
I'd still like to read that poetry. What rhymes with Dexter?

Emma:
Prick. It's a half rhyme.

Too many bitter reviewers…

After perusing other reviews for this movie, I believe that many of the
ratings are low, not because viewers disliked the movie, but because
they disliked the element in which the film shines. The film succeeds
in drawing the audience into the friendship between the main
characters, played by Jim Sturgess and Anne Hathaway. Both characters
find happiness and meaning in parts of their lives, while suffering
through other portions without attaining goals they've set for
themselves; i.e., this is real life.


What the poorly-rating reviewers seek is escapism. In my view–however
limited–this film aims to depict two human beings as they learn, grow,
and fall in and out of touch with one another. Thus, don't expect any
fairy tales here and don't punish the rating on this movie because it
isn't a fairy tale!

A predictable conclusion to this movie would place Sturgess and
Hathaway side by side, married, and living together untouched by the
trials of a realistic relationship. Instead, the director effectively
and with calculation showcases some of life in the scenes and merely
hints at events not shown on the screen. As the film narrates
exclusively through one date each year (hence, the name), partial
narratives are expected. The final third of the film, shunned by a few
reviewers, elevated the creative vision of the story because it
introduces the unpredictable nature of real life into a movie that was
otherwise a run-of-the-mill romance. Again, speaking in terms of the
development between characters, the movie is above average. Speaking in
terms of storyline, the first two-thirds, to a certain degree, lack
what the final third delivers: surprise!

The juxtaposition of the present with the past near the end of this
film makes the events even more potent than they would have been.
Audience members who do not fall into the "half-wit" category can
follow the story, regardless of what the viewers who read the novel
state in their reviews. Bravo! Lastly, Anne Hathaway is exceedingly
lovely.

TagsFrance
The Woman
Don't Be Afraid of the Dark