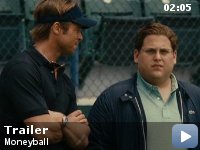 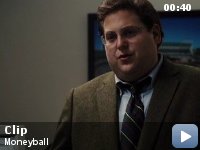 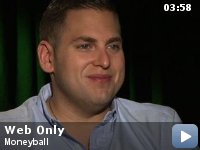 Storyline
Oakland A's GM Billy Beane is handicapped with the lowest salary constraint in baseball. If he ever wants to win the World Series, Billy must find a competitive advantage. Billy is about to turn baseball on its ear when he uses statistical data to analyze and place value on the players he picks for the team.

Taglines:
What are you really worth?

Several of the Oakland A's radio announcers are heard throughout the movie, but are not credited: The legendary Bill King — who's signature line "HOLY TOLEDO" punctuates the Royals rally to tie the A's from an 11-0 start during what would become the 20th win in a row — is foremost among them. At various points from the 1950s until his death a few years ago, King called Oakland Raiders, Golden State Warriors, A's and early on San Francisco Giants games. Also heard are Ken Korach, then King's second fiddle who later took over the #1 play-by-play role, and color man Ray Fosse, a veteran of the 1970s Oakland championship teams who continued to call games for the A's through the 2011 season.

Anachronisms:
When Billy Beane is shown playing for the A's in 1989 he has the MLB logo above his name on the back of his jersey. The logo didn't appear on the back of jerseys until 2004.

Billy Beane:
[during a meeting with his scouts]
If we try to play like the Yankees in here, we will lose to the Yankees out there.

Worth admission even if you care squat about baseball


Just caught this at the Toronto Film festival. It is undoubtedly one of
the higher quality dramas in 2011. At its heart is a baseball-centric
docu-drama, but even folks with zero baseball knowledge/interest can
enjoy and be moved by this movie.

Jonah Hill's performance in the film is phenomenal, and this may be the
break that that young actor has been joshing for. His portrayal Peter
Brand, a Yale Economics major and full time computer nerd is beyond
believable, you practically swear that you know him personally a few
days after the movie.

The role of Billy Beane, played by Brad Pitt, is an incredibly
demanding one. While there are tons of dialog, hack arguments, display
of physical rage, etc; it is the silent story telling, emotional
turmoil, change-of-heart reflections, pupils-triggered catharsis, and
so on that are the toughest to convey and requires a well-seasoned
character actor. This is easily Brad at his widest acting range – and
you see all of it in a little over two hours.

To be totally honest, I have not been tracking Philip Seymour Hoffman's
acting career until this film. His portrayal of the ready-to-exit
Oakland A's coach Art Howe, caught between "the for-sure old money" and
the "crazy senseless new reality", convinced me that they couldn't have
casted this part any better. Hoffman delivers on every single scene and
you literally sweat his frustration along with him. This foil to Brad
Pitt's character is actually effective enough to save several heavy-
drama exchange where Brad's delivery falls slightly short of the mark.

This is an "onion" movie, constructed purposely to be entertaining on
many levels. It can be watched purely as an entertaining account of
modern baseball history – how player statistics became one of the most
important factors determining financial success in modern baseball.

For more sentimental audience it tracks the journey of a man, forced to
embrace change and disappointment as he fumble aimlessly through life
etching out an unremarkable career first as a failing professional
player, then small-time scout, and washed-out General Manager; only to
finally wake up – and find himself becoming one of the greatest living
innovator of the modern game.

Finally, for the abstract-at-heart, and those who knows or cares little
about the game of baseball (like yours truly), this is a tale of an
industry under irreversible change; a documentary of the conflict
between innovators who brave the slings-and-arrows to map out the new
ways, and the old stalwarts who goes all out to protect their crumbling
turf.

At this historic moment in time, the message really hits a home-run!
Other than baseball, we've recently witness similar changes and
conflicts played out in public across the automobile, music
distribution, movie distribution, book distribution, home computer,
banking , and many other industries. Every unemployed in a vanishing
industry can easily identify with the old Billy Beane, it is how Billy
leverage his disappointment and experience, to turn his life around
that we can all aspire to.

A worthy note is the soundtrack for the movie, grass-root simple and
heartfelt, it sent me looking for the album on itunes – only to realize
that the movie has not been officially released yet.