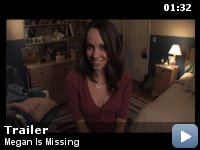 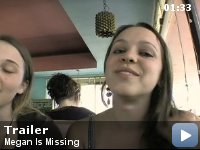 Fictional drama based on actual events, about 2 teen-age girls who encounter an internet predator.

Storyline
Megan Stewart, 14, and her best friend Amy Herman, 13, though opposites in personality, are best friends. Megan carries the front of being the most popular girl in school, but this masks a lifestyle of hard partying, drugs, alcohol and indiscriminate sex. Amy, unpopular and socially awkward, clings to her relationship with Megan as a lifeline to social acceptance. Together, these two young girls forge a deep friendship based on their mutual needs. The two girls regularly communicate by web chat cameras or cell phone, and even meet boys online. As Megan seeks friends who are different from her usual posse of hanger-ons, she is introduced by a friend online to a 17 year-old boy named Josh in a chat room. Megan and Josh bond quickly, leaving Amy feeling a bit left out. One day, Megan goes to meet Josh in person, and she is never seen again. Amy launches into a concentrated effort to find her friend…

Taglines:
Megan and Amy are best friends. They share secrets. They chat with guys online. And in a few days, they will never be seen again.

In October 2011, the New Zealand Censorship Board (OFLC) banned Anchor Bay's release of this film by classifying it as 'Objectionable'. They claimed that it contained sexual violence and sexual conduct involving young people to such an extent and degree, and in such a manner that if it was released it would be 'injurious to the public good'. They went on to say that it relished in the spectacle of one girl's ordeal, including a three-minute rape scene. They also stated that it sexualised the lives of young teenage girls to a 'highly exploitative degree'.

A Reminder of a Local Tragedy In My Home Town!!

Actually my heart sank when I read the description of the movie because
there were some striking similarities to a tragic case that happened
here in Portland Oregon. Another reviewer mentioned that the movie is
supposed to be based on a true story but when they tried to research it
they could not find anything that matched. If you read more carefully
you will see it is based on a study of multiple cases which I am
guessing means they used elements from different cases to create this
story.


Several years ago 2 teenage girls who were friends disappeared in
Oregon City Oregon. Their names were Ashley Pond (almost 14 years old
when she went missing) and Miranda Gaddis (14 years old when she
vanished). They both lived in the same apartment complex on a dead end
road. At the top of the road there was a house where a man named Ward
Weaver lived with his daughter who was roughly the same age as Ashley
and Miranda. The two girls became friends with Weaver's daughter. In
August of 2001 Ashley accused Ward Weaver of attempting to rape her but
the police did not investigate. In January of 2002 Ashley disappeared
on her way to school. As in the movie – everyone searched for her
including her friend Miranda – she was never found. Two months later
Miranda vanished.

As in the movie there was media coverage that speculated the girls ran
away. There was talk that one girl had a bit of a reputation and came
from a home that would be considered "broken". Both families insisted
their children were victims of foul play. They appealed to the public
and put up ads on billboards all over the city. In both cases the girls
left for the school bus stop at the top of the road but never made it
there. They just seemed to vanish. They were never seen alive again.

For months there was speculation that Weaver had something to do with
the girls vanishing but he denied it. I remember him giving a local
news anchor a tour of his property showing his yard and proclaiming his
innocence. I also remember being sickened when the truth came out. At
the time of the interview they were standing on a recently poured
cement pad and underneath that pad was the body of one of the girls in
a blue barrel.

I remember being glued to the TV for hours in August of that year as
the story broke. Every local channel ran uninterrupted coverage that
weekend. I remember watching them use ground penetrating radar and
cadaver dogs. I remember the video from the news helicopters as the
police sifted through the dirt looking for the bones of the missing
girls. Eventually they were both found dead on the property. One of the
bodies was found in a shed. The other girl had been put in blue barrels
before she was buried behind the house and then covered with concrete
where Weaver planned to put a new hot tub. I remember crying for the
families of those children whose lives were cut short by a monster.
Watching this movie with all the similarities brought all of this to
mind in vivid detail.

What I took from this movie was that this could happen to anyone's
child in the blink of an eye. I grew up in that neighborhood. I had a
friend that lived in the same apartments that those two girls had lived
in. When I was a teenager I went to the same schools that Ashley and
Miranda went to. I walked on the same roads, shopped at the same
stores, etc. If this horror had happened 10 years earlier, it could
have been me or one of my friends. From time to time I still have to
drive past the place where those girls died and laid hidden in the
ground while their families searched for them. Eventually they tore the
house down but the land will never go away.

Who cares if the acting is bad, the writing is corny, the budget was
cheap or if it was shot in a week – It is the message that is
important. If this movie brings awareness to young girls or saves a
single life it is worth every star I can give it.