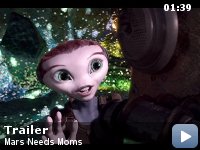 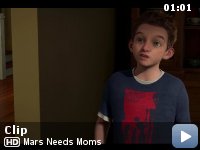 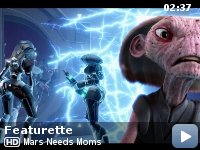 A young boy named Milo gains a deeper appreciation for his mom after Martians come to Earth to take her away.

Storyline
A young boy named Milo gains a deeper appreciation for his mom after Martians come to Earth to take her away.

The film had an opening weekend gross of only $6.9 million, making it the twelfth worst opening ever for a film playing in more than 3000 theaters, and one of the lowest openings for a major 3D release. Due to its high budget of $150 million, the film is considered a massive box office bomb. Its commercial failure contributed to Disney's cancellation of the planned remake of
Yellow Submarine, which was intended to be made with the same motion capture technology used in "Mars Needs Moms".

Mom:
I thought I told you to go to bed!

Mom:
Milo, my life would be so much better if I didn't have to be a nagging mom!

Milo:
Yeah, well, my life would be so much better if I didn't have a mom at all.


The first few minutes of this i was genuinely quite impressed. I've
never seen such fluid, believable movement in digitally animated
characters before, it's got to be at least as good as Avatar in that
department. It's pretty cool people can make such an authentic looking
world with computers.


The problem is, what kind of world is it?

Mars is a world which badly needs mothers, it turns out. It's a
female-run planet (shouldn't that be Venus then?) where babies simply
pop out of the ground in a kind of immaculate test-tube conception. We
don't see any male martians, they are referred to once in the film then
forgotten about. "The boys are sent below, where they are raised by the
hairy tribe guys". There are no fathers. They don't need fathers. No
one needs fathers.

There's a section in the film where family is discussed & the writers
go to some quite tortuous lengths to not mention the words 'man' or
'father' anywhere. Keep an eye out for it if you end up watching it.
When Milo is asked by a martian what parents are, he replies 'you know,
people like my mom, who look after kids like me'.

What kind of message is this for little boys, like the one in this
film, & the ones watching this film, who after all must grow up to BE
fathers? Here's the message:

You are not needed. A father's role is sperm donor & ATM machine. The
miracle of life is a exclusively female domain.

This is a misandric movie because there are no normal, ordinary men in
it, only Gribble, a fat, creepy overgrown child (subtext: what little
boys will grow up to be if they don't change their ways & get with the
feminist program) & Milo's unreliable, absent father, on screen for
literally seconds. Milo's future is laid out for us along these two
roads.

The female characters, on the other hand, are kick-ass & cooooool…
with Ki, the strong, independent, heroic graffiti artist rebel who
rescues Milo & saves the day. There are practically no other speaking
roles except for her & the mother, who is wholly good. Flawless, in
fact. She doesn't have to learn or change or grow, there is no lesson
for her. I guess mothers are the target audience for children's films,
after all they're the ones that are going to be choosing which films
their children see. So i suppose it makes good business sense to pander
to their egos.

Awful belaboured dead-horse beating dialogue aside ("I'm looking for my
mom. She washes my clothes. She vacuums the house") this isn't actually
a badly made film, it's just a bit needless & empty, with shiny
technology being used in service of some disturbing & hateful politics.