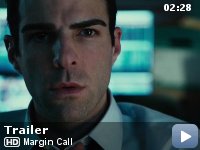 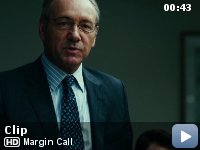 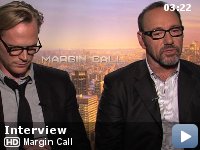 Follows the key people at an investment bank, over a 24-hour period, during the early stages of the financial crisis.

Storyline
A respected financial company is downsizing and one of the victims is the risk management division head, who was working on a major analysis just when he was let go. His protégé completes the study late into the night and then frantically calls his colleagues in about the company's financial disaster he has discovered. What follows is a long night of panicked double checking and double dealing as the senior management prepare to do whatever it takes to mitigate the debacle to come even as the handful of conscientious comrades find themselves dragged along into the unethical abyss.

Taglines:
Be first. Be smarter. Or cheat.

J.C. Chandor said that he wrote the script for the story he had been carrying around in his head for about a 'year-and-a-half' in just four days, filling time between job interviews in Boulder, Colorado.

Errors made by characters (possibly deliberate errors by the filmmakers):
Eric Dale ('Stanley Tucci') makes a mathematical error when he talks about how much time is saved by people using the bridge he built. He says 559,020 days are saved, but the correct number is 5,590,200.

Sam Rogers:
You are panicking.

John Tuld:
If you're first out the door, that's not called panicking.


Saw this last night. Set at a Wall Street firm on the night in 2008
when the leaders realize that changes in the market will wipe them out
if they don't immediately stop selling the products that have been
making them all rich, the movie centers on the moral dilemma –
recognized by some characters but dismissed by others – that they face
in unwinding their positions, saving themselves but shifting the pain
to others.


The movie finds a way to hold the mirror up to our civilization,
showing how we are all complicit in a collective 'dream' (one character
says at one point, in response to another who says he feels like he is
in a 'dream', 'Funny, it seems like I just woke up'). The dream is the
illusion of easy, risk-managed wealth that the financial markets
manufacture, again and again, since the emergence of capital markets
200 years ago, until the illusion morphs overnight into a panic.
Reality intervenes, fear takes over, and the 'survivor' is the guy who
first reaches the lifeboat. So there are no villains in this movie,
just people, richly drawn, beautifully acted characters realized by
some of our best actors who relish the opportunity to show what they
can do given a killer script and enough screen time between lines to
actually be the people they are portraying.

Central to the movie's success:

2) finding a moral question that can be resolved in a night, yet which
is nevertheless a perfect allegory for the whole set of moral questions
raised by an economy that works the way ours does, rewarding false
confidence, recklessness, and deceit as often as industry, skill, and
integrity

3) the placement of young, innocent but perceptive characters at the
center of the drama, who function as our eyes and ears, who are like
stand-ins for all of us who weren't there, at the heart of the dream
machine, when the latest fantasy of easy wealth was exposed as a
collective delusion

4) really 'gets' the trader ethos and manner – they are a kind of
warrior caste, foul-mouthed, impulsive, deeply selfish, surviving by
their ability to outplay their counterparts, and yet living by a
warrior code that sets boundaries on what they will and will not do to
one another (having spent three years on Wall Street several panics
ago, it rang as true as any movie I have seen on the subject)

It's like Mamet, except you don't have to work as hard to figure out
what everyone's up to. It's like Chinatown, except the 'crime' is
something far worse than molesting a single young girl. These guys
f****d the entire planet, for Ch*****sake. It's like the best movie
I've seen in a little while.

What an incredibly sure hand from a director on his maiden voyage! Who
is this guy? Whoever you are, please don't stop. I would pay a lot to
see what he could do with topics like 'the decision to go to war', or
'the emergence of China/India/Brazil/Indonesia from poverty to global
player'. Hell I would go see him revive Mother Goose, after this debut.

TagsUSA
The Sorcerer and the White Snake
What's Your Number?