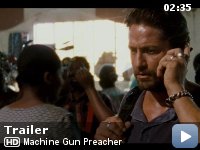 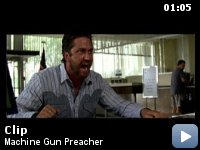 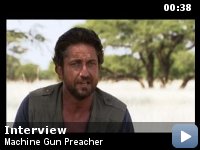 The story of Sam Childers, a former drug-dealing biker tough guy who found God and became a crusader for hundreds of Sudanese children who've been forced to become soldiers.

Storyline
The story of

Taglines:
Hope is the greatest weapon of all

Errors made by characters (possibly deliberate errors by the filmmakers):
The film depicts Sam in the Allegheny County Jail, but he is wearing the uniform of a PA Department of Corrections (DOC) inmate.

Powerful, graphic, unsettling movie with a profound message of hope and human courage shown in adversity


I went into this movie with no expectations. The title made it seem
like it would be a typical action movie; all guns and brawn and little
in the way of storyline but boy was I wrong. This movie, based on a
true story, was powerful and touched me so much that it has prompted me
to write my first film review on IMDb in over six years! This is a
movie with a solid pedigree of cast behind it, it is based on the life
of Sam Childers (Gerard Butler), who without giving much away, has a
criminal past, finds God and embarks on undertaking missionary work in
civil war-torn Sudan, leaving his loyal, loving wife Lynn Childers
(Michelle Monaghan) and his young daughter Paige (Madeline Carrol) back
home in Penslyvania. This movie follows Sam's juggling how his
Christian faith inspires him at home and also in Sudan.

Gerard Butler has always been something of an enigma to me. In my
opinion he can be hit and miss as an actor, but in this movie he gives
a powerhouse performance as the emotionally conflicted and stunted Sam
Cilders, someone who follows his faith and shows simple, sometimes
primal humanity in inhumane foreign environments. I think this is
Gerard Butlers best performance to date, he expertly immerses himself
into Sam , he is so believable in this role, both emotionally, mentally
and physically. The audience may find it hard to remember it is just a
movie at some stages. Michael Shannon is amazing a Sam's childhood
friend Donnie, a troubled soul who is another person loyal to Sam but
ultimately flawed.

This is not a movie I feel will get the awards it richly deserves.
Similar in tone to Hotel Rwanda, it is an inspiring story but with a
sobering message. It reminded me a lot of Hotel Rwanda because it
showed how one man alone with enough faith in simple humanity can make
a difference. Sam Childers is not a saint; far from it, he is flawed
and he has a violent and criminal side and this is evident in the
movie. However he is also shown as having humanity and the fact that he
decides to make a stand and do something away from the comfort of his
armchair in America is testament to his character. Would the audience
have the courage to do what Sam did? That is a question facing the
audience as they leave the movie, along with the graphic images which
will haunt the audience for a long time after seeing the movie.

There are so many powerful moments in this movie that it is hard to pin
point any without spoiling the plot. This is not a movie that you
should take a date along to; or anyone who is squeamish or unsettled by
blood and guts. This is a movie that takes the audience in the palm of
their hands and opens their eyes to the blunt reality and the truth of
genocide. It is similar in that way to Hotel Rwanda but I found this
movie even more graphic and unsettling in many ways. This is a movie
you should watch at all costs although you may not want to see it
again. It is hard hitting, powerful, emotional but most of all thought
provoking.