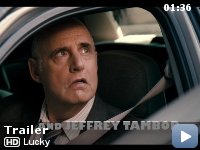 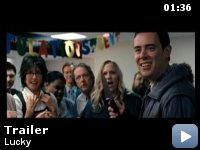 A wannabe serial killer wins the lottery and pursues his lifelong crush.

Storyline
A wannabe serial killer wins the lottery and pursues his lifelong crush.

Taglines:
Even a serial killer can win the lottery

Love it or hate it, this film is amoral


Very rarely do I have any desire to post a review. I've seen it, I know
what I think, and usually someone else has said everything that needs
to be said. Not so with "Lucky."

This film shocked me with its amorality. And I liked it.

Before I watched this, I thought, perhaps, that it would be akin to
"Dexter" – a serial killer that the viewer is asked to empathize with,
maybe forgive, and perhaps even root for. I mean, what else could I
expect from what the synopsis seems to suggest is a serial killer
rom-com. I was wrong. No one in this film is asking for forgiveness. No
one in this film seems to even imagine that a universal or objective
morality exists which would pass judgement.

This is one of the only, if not the only, film I have seen that
exemplifies rationally self- interested actors carrying on their
affairs as though no religious or societal morality existed or, at the
least, was valid. Even in the films based on Ayn Rand's fiction (a
person who championed "the virtue of selfishness" and fought against
religion and collectivism/humanism), there was always a wink or a nod
when some character violated the Judeo-Christian-humanist morality. The
same can be said of most of the horror and "shock" films – the shock
and horror are usually caused by reactions to the violation of societal
norms. Here, there is nothing.

One previous reviewer implied the film was boring. I wouldn't go so
far, though I would accept "anti-climatic." Indeed, amorality is
certainly that. If one starts from a place where killing and kissing
are of equal objective moral value – none whatsoever – then it stands
to reason that neither occurrence has any higher meaning.

In "Lucky", the lack of regard for morality, as understood by the
majority of the populace, is not obvious. It isn't a clear part of the
plot. It isn't relied upon to engender fear or revulsion. I almost
didn't notice it until near the end of the film. It is as if the film
was made entirely by people unaware that such a concept as "objective
morality" even existed. Of course it wasn't. If for no other reason
than that, "Lucky" deserves praise.

TagsUSA
The Task
The Front Line