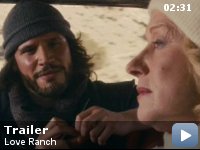 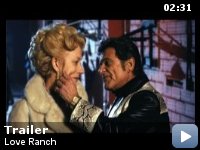 A drama centered around a married couple who opened the first legal brothel in Nevada.

Storyline
In the mid-70s, near Reno, Grace Bontempo runs the Love Ranch, a legal brothel. Her husband Charlie, with big dreams, a felony record, and an aptitude for spending and infidelity, is the brothel's public face. On the day Grace's doctor tells her she has cancer in an advanced state, Charlie takes on new client, Argentine boxer Armando Bruza, Charlie's ticket to fame: he hopes to promote a fight with Ali. Because of Charlie's felonies, Grace is Bruza's titular manager. With the IRS and the church ladies circling the business, Grace takes the manager's role seriously and, along the way, Bruza charms her. Secrets play out: is there love at the Love Ranch? How will Charlie respond?

Taglines:
When It Comes To Love… Everyone Pays A Price.

The second time that real-life husband and wife Taylor Hackford and Helen Mirren have worked together on a movie. The first time was
White Nights.

Anachronisms:
After Grace kicks Bruza out of her car, she drives to his trailer park where we see a small satellite dish attached to one of the trailers, but mini dishes weren't used by private residences in 1976.

Grace Bontempo:
Selling love will make your rich. That's what my mother taught me. Just don't put your heart in it.

A Movie That Could Have Been 9 or 10 Rating


I guess I cannot agree with the ratings here on IMDb every time.

For example I just saw Scott Pilgrim vs. the World rated 8.0 then I
seen this movie, Love Ranch only 5.3 — and while the general public
still seems to be in love with the youthful glee based in symbolic
fantastic fake X-box gaming TRONlike facade of Scott Pilgrim, they seem
to rank an incredible life scenario reality based movie, Love Ranch
which is based on a couple in their sixties based on a true story, as
it were borderline doggy do. Once again, I guess most movie goers would
rather not handle the truth.

I must admit, when I was watching Love Ranch, I was reminded of the
movie Papillon, in which they tried to fit a two week read into a two
hour movie. I thought I was watching the same kind of movie making from
a book being made into 2 hour script reducing it to bits and pieces of
condensed scenes. But I guess it was merely a rushed screenplay and not
a condensed book when I read about it on IMDb. I suppose part of the
problem could have been the spontaneous direction in the seemingly
rushed storyline.

Other than that I would give this movie with better editing and
direction of script a 9 or 10 rating because the intense reality and
grip of the characters like between Helen and the boxer. This was
incredibly well done… may sometimes been kind of unbelievable, but in
the end their impeccable acting crafts both pulled together a gripping
story.

I think without a doubt it could and should have been handled better
through production, but the movie itself is infinitely more meaningful
than a teeny love triangular crap as in the movie I spoke of earlier.

All in all a great movie that needed to be nurtured a lot more to be
made into a fantastic movie.

TagsUSA
Even the Rain
Season of the Witch