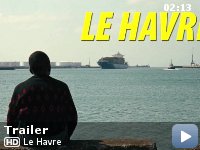 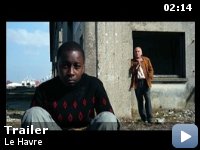 When an African boy arrives by cargo ship in the port city of Le Havre, an aging shoe shiner takes pity on the child and welcomes him into his home.

Storyline
When an African boy arrives by cargo ship in the port city of Le Havre, an aging shoe shiner takes pity on the child and welcomes him into his home.

A sweet, simple film with a dark sense of humor


(Read the full review at http://nickplusmovies.blogspot.com)

I started off my experience at this year's Toronto International Film
Festival with Aki Kaurismäki's "Le Havre", a rather obscure, small
production that was competing for the Palme d'Or at Cannes (it was
Terrence Malick's "The Tree of Life" that was the big winner). The
question is: Did I start off on the right foot? Read on to find out…


"Le Havre" centers on an elderly, working-class shoe shiner named
Marcel Marx (played by André Wilms), living with his loving wife
Arletty (Kati Outinen) in the French port city of… Le Havre. Although
his profession only leaves him with enough money to get by, he never
gives up hope and always finds great joy and warmth in all the people
in his life– be it his friendly, selfless, next-door neighbor or the
kind owner of the local bar. Marcel's life takes a bit of a turn when
he must send his ill wife to the hospital, hoping she will get better
soon. But that's not it– soon after, when he finds himself alone,
eating a sandwich at the harbor, he discovers a young African boy named
Idrissa (Blondin Miguel) hiding in the water. Marcel befriends him and
learns that he had been hiding with many other illegal immigrants in a
shipping container, with hopes of arriving in London to meet up with
his aunt. The old man voluntarily goes out of his way to keep him away
from authorities and completely out of sight, but soon, this situation
quickly transforms into a cat-and-mouse game, lead by the persistent,
intimidating, wolf- like police inspector Monet (Jean-Pierre
Darroussin).

With its simplistic plot, clearly defined characters, and inviting
setting, this film has all the qualities and characteristics of a great
short film– if you don't count its feature-length runtime. Is this a
bad thing? Hardly! I find that this makes the film all the more
absorbing and enjoyable, though slow in progression at times and thus
able to make your average modern-day moviegoer lose interest. But I
still believe that sometimes, it's nice to just sit down and follow a
naturally flowing, straightforward story, when most of the movies you
see today are flashy and overly stimulating to the point where they
bore you. "Le Havre" is something refreshingly different, for a change.

Rarely do films combine comedy with drama in such a natural,
uncontrived way. With this film, Aki Kaurismäki proves to be one of the
few working directors able to pull off a mixture of dark, ironic, and
deadpan humor while maintaining the same upbeat, cheerful, and
optimistic tone throughout the entire film. A great example of this
guy's exemplary sense of humor is the opening scene of the film, where
we see Marcel going around with his shoe shining materials, looking for
a paying customer. He finally lucks out when he approaches a suspicious
looking type holding a suitcase in his hand. As he shines this man's
shoes, we see two other mysterious figures watching from a distance.
It's clear that something's up. When Marcel finishes his job, the man
pays him and quickly tries to escape. But it's too late; we hear
gunshots, a tire squeal, and a scream as the camera lingers on Marcel,
whose facial expression remains pleasant. He simply says: "Luckily he
had time to pay.". Of course, since it's more of a visual gag, it's
much funnier when you see it for yourself. Having said that, there's no
denying that this film has very smart comedic elements.

What I love just as much– if not, more– about this little film is how
authentic and down-to-earth the characters are in their interactions.
Every scene is made into such an accurate portrait of life thanks to
all of the real, human performances from the entire cast of
lesser-known actors. The only thing that threw me off was how the
couple of Finnish actors in the film let their accents slip through as
they were speaking French. But this would be barely noticeable for
those of you who don't speak either one of these languages.

Although this film is Finnish, it's obvious that it's shot on location
in France. I was breathless as I got to admire the beauty of the ocean
and the quaint coziness of the old city buildings. Sadly, this is the
closest I've ever gotten to visiting France! No wonder these sights
took me away.

In sum, Aki Kaurismäki's "Le Havre" is a simple, human tale that
remains light and pleasant while brushing on topics of illegal
immigration and the illness of a loved-one. It's a soulful film that
mixes smart humor with true emotion, without ever feeling artificial. I
recommend looking for this hidden gem. You might just like it.