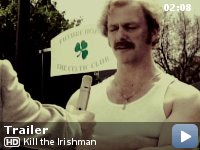 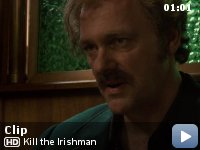 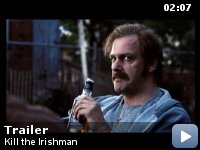 The true story of Danny Greene, a tough Irish thug working for mobsters in Cleveland during the 1970's.

Storyline
The true story of Danny Greene, an impoverished but charismatic young Irish-American who rises to power as president of longshoreman's local and is charged with corruption but evades serious jail time by becoming an FBI informant. With fearless nerve he joins forces with a Mafia gangster to rise to power in Cleveland's underworld, gaining the reputation of a Robin Hood figure and a man with nine lives as he escapes countless assassination attempts.

Taglines:
Based on the true story of Danny Greene the man the mob couldn't kill

Danny Greene:
What makes me so special?

Joan Madigan:
'Cause you're different from all those idiots.


I'm not often writing critics on IMDb, but when i checked the page of
this movie I was really surprised that there were so few reviews.

I must confess that I haven't heard anything about this movie before I
read that there will be free theater screenings of "Kill the Irishman"
in my hometown. As far as i know, the film also had a very limited
theater release in the USA, which is a sad thing because this movie was
surprisingly good and well-crafted and was one of the best films I've
seen in the last months.

The film tells the true story of Danny Greene, a tough irish gangster –
and let me tell you, it is definitely a story worth telling.

I guess many of you are informed about the story of Danny Greene, so i
won't go further into the story.

The movie features an impressive cast including Ray Stevenson, Val
Kilmer, Christopher Walken and many other familiar faces known from
other mob movies. Ray Stevenson gives an incredibly good performance as
Danny Greene and manages to keep his character really violent, but also
likable. This movie could give him a career boost for bigger roles.

The direction and the cinematography are very nice and i'm hoping this
movie will enable Jonathan Hensleigh more work soon, because he's
definitely a talented craftsman.

In some reviews i read that other people complained that this movie is
just a ripoff of Goodfellas. That isn't true. The movie stands well on
his own, despite featuring some actors known from Goodfellas, and
wasn't that also the case in Shows like The Sopranos? Why complain
about that? And last but not least, it IS a true story and who grows
sick of seeing good mobster movies? Definitely not me.

TagsFBI USA
Malice in Wonderland
Even the Rain