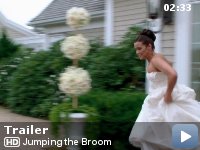 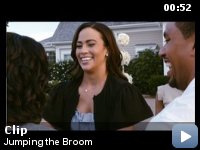 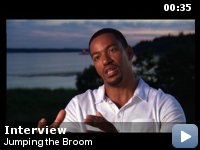 Two very different families converge on Martha's Vineyard one weekend for a wedding.

Taglines:
The Taylors Are Downtown

Continuity:
Pam's apology letter and her voiceover during the letter are completely different. Letter: Dear Sabrina, I only wanted what I thought was best for my son. But I saw the look on his face when you left and I realized you are what is best for Jason. Whether or not you decide to jump this broom, I want you to have it because of what it means to our family. May you enjoy the same happiness we did. I wish you all the best, Pam Voiceover: "Dear Sabrina, I'm sorry. I feel sick about how I behaved this weekend. I was afraid of being alone. I want you to have this broom because it means more to me than almost anything else in the world. I pray you and Jason have a long happy life together. Pam"


I used to look at IMDb regularly and base whether or not I went to a
movie on the reviews. With this currently rated so low, I would have
normally stayed away, but thankfully I found Roger Ebert's review,
which was wonderfully objective. Is this movie perfect? No. Is it fun?
Yes. Will you laugh? Probably. I've read several comments included in
reviews on here about the side story lines, how little body fat there
is on the actors (Really?! Maybe showing fit people is a really good
idea.), and a few other things. My basic answer is, so what? Enjoy the
movie for what it is. It's a brief look at the life of a two very
chaotic and dysfunctional families. Sometimes that's how life works. It
may not be your life, but it may be close to someone else's. There are
times when the dialogue is so over the top, it was obviously to achieve
a certain comedic or dramatic moment, and I'm OK with that. One of the
important aspects to me is that in this day and age of movies that
portray the worst of society, this portrays the successful black
families. The characters were very believable for me. In several
instances, I could have sworn I met them at some point in my life. The
main characters are certainly the core of the movie. Sabrina and Jason
are the young couple whose wedding is affected by the vastly different
backgrounds they come from. The mothers are given a very powerful place
in the film, with their actions affecting everyone else, as they
should. The dynamics are interesting to watch at first, but by the end
of the movie, it's very easy to see how and why people are the way they
are. Some of the climaxes in the movie are easy to spot, others not so
much. In the end, this was a very enjoyable movie, and definitely worth
seeing. I almost never choose a romantic comedy as my first choice, but
this was such a well rounded movie, even I found it very enjoyable (as
a guy) to go to. It wasn't sappy, it wasn't cheesy, it was just plain
fun.

TagsUSA
Dare
Hobo with a Shotgun