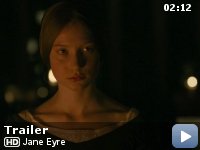 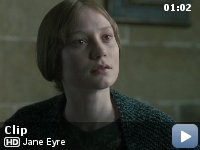 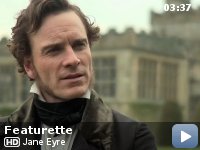 A mousy governess who softens the heart of her employer soon discovers that he's hiding a terrible secret.

Storyline
After a bleak childhood, Jane Eyre goes out into the world to become a governess. As she lives happily in her new position at Thornfield Hall, she meets the dark, cold, and abrupt master of the house, Mr. Rochester. Jane and her employer grow close in friendship and she soon finds herself falling in love with him. Happiness seems to have found Jane at last, but could Mr. Rochester's terrible secret be about to destroy it forever?

While shooting the climactic post-wedding scene between Jane and Rochester, filming had to be stopped repeatedly because Michael Fassbender's suspenders kept breaking and had to be re-sewn.

Rochester:
I'm asking what Jane Eyre would do to secure my happiness.

Jane Eyre:
I would do anything for you, sir. Anything that was right.


Charlotte Brontë's "Jane Eyre" has been my favorite book since I was 11
years old. The tale of a feisty orphan-girl-turned-governess who finds
true love in a spooky mansion and ultimately redeems a tormented hero
has made it to the top of every "Best Love Stories" list since it was
first published in 1847, and with good reason. It's the perfect Gothic
novel, melding mystery, horror, and the classic medieval castle setting
with heart-stopping romance.


There have been at least 18 film versions of "Jane Eyre" and 9
made-for-television movies–27 in all! I have seen most of them, some
multiple times–-both out of my deep love for the tale, and as part of
the research for my novel "The Secret Diaries of Charlotte Brontë," the
true story of Charlotte's remarkable life, her inspiration behind "Jane
Eyre," and her turbulent, real-life romance.

Every screen version of JANE EYRE has its merits. I especially loved
Timothy Dalton's portrayal of Mr. Rochester in the 1983 mini-series,
and the 2006 Masterpiece Theatre mini-series starring Ruth Wilson and
Toby Stephens. I was very curious to see how the new JANE EYRE
adaptation from Focus Films would measure up. I am happy to report that
the film, which I saw last night at an advance screening, is very good
indeed, with marvelous visuals, terrific performances, and enough
unique elements to make it a worthy new addition.

The most notable distinction that sets this film apart from the rest is
its structure. Rather than telling the tale in a linear fashion, it
begins at a crisis moment later in the story, and tells the majority of
the tale in flashback–-which works wonderfully well, enabling
screenwriter Moira Buffini to effectively compress a long novel into a
two-hour time span.

The movie opens as Jane is fleeing Thornfield after having discovered
Mr. Rochester's dark and heartbreaking secret. We fear for her as she
becomes lost on the stormy moor. The mystery continues as St. John
Rivers (well-played by a sympathetic yet appropriately stern Jamie
Bell) and his sisters take her in. As Jane ruminates about the past
events that led to her escape, we are treated to the story in
flashback.

The casting of Mia Wasikowska as Jane Eyre also sets this production
apart, since she is closer in age than most actresses who've played the
role to the character in the novel, who was about 18 years old in the
Thornfield section. Although I wish Mia's Jane was a bit more "swoony"
over Mr. Rochester earlier on (yes, she is supposed to be stoic, but I
missed that phase where we get to see her blossom as she falls in love
with him, and then is utterly crushed when she believes him to be in
love with Miss Ingram), Mia truly inhabits the role, beautifully
portraying Jane's sense of self-respect, integrity, and restraint, as
well as her passion and vulnerability.

Michael Fassbender embodies Mr. Rochester with the ideal blend of
charisma and sinister brooding, while at the same time allowing
glimpses of his underlying desperation and the wounded depths of his
soul. Sally Hawkins as Mrs. Reed effectively portrays the icy ogre who
menaces the young Jane (a spirited and appealing Amelia Clarkson.) And
Judi Dench, as always, gives a superb performance as housekeeper Mrs.
Fairfax.

The film's locations do justice to the novel's often gloomy,
atmospheric tone. Director Cary Fukunaga makes excellent use of Haddon
Hall in Derbyshire, one of the oldest houses in England, as Thornfield
Hall, emphasizing its dark, Gothic, masculine feel. The exterior
locations–gardens, cliffs, craggy rocks, stone walls, and seemingly
endless fields–make an arresting, dramatic backdrop for the story. You
truly feel as though you are in the middle of nowhere.

My only minor gripes are that when Mr. Rochester's secret is revealed,
it feels a little too prettified, and the ending was too abrupt for me.
But that aside, the filmmakers have done a masterful job translating
the novel to the screen. I highly recommend it! –Syrie James