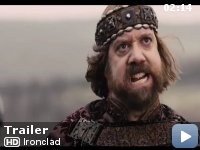 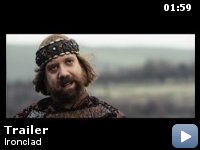 In 13th-century England, a small group of Knights Templar fight to defend Rochester Castle against the tyrannical King John.

Storyline
It is the year 1215 and the rebel barons of England have forced their despised King John to put his royal seal to the Magna Carta, a noble, seminal document that upheld the rights of free-men. Yet within months of pledging himself to the great charter, the King reneged on his word and assembled a mercenary army on the south coast of England with the intention of bringing the barons and the country back under his tyrannical rule. Barring his way stood the mighty Rochester castle, a place that would become the symbol of the rebel's momentous struggle for justice and freedom.

Richard Attenborough was forced to back out of this production due to health concerns.

Factual errors:
The film shows 20 or so rebels holding the castle against King John. In the real siege there were 100.

Albany:
[Calls down to King John]
You are no more a king than the boil on my arse!
[Turns to his friend]


Albany:
What a tedious little man.

Mud, blood and lots of ambition


There are plenty of lower-budget independent films that have gone on to
be more critically acclaimed and more financially profitable than
big-budget Hollywood pictures. What is rare, however, is an indie film
that masquerades as one of these pictures. A self-labelled "all-
star indie action blockbuster" and "inspired by history",'Ironclad' is
such a film, trying to redefine the boundaries of British cinema.


Whether by intention or by coincidence, 'Ironclad' picks up a few years
after the end of Ridley Scott's 'Robin Hood'. It is England, 1215. King
John (Paul Giamatti) has been forced to sign the Magna Carta, which
limits his power and ensures the freedom of men.

With the help of a Danish army, the King rampages across the country to
regain absolute power. Baron Albany (Brian Cox) and a band of rebels
take Rochester Castle in an attempt to stop the tyrant king. A siege
takes place, and the rebels must hold the castle until reinforcements
arrive.

The film certainly ticks many of the boxes of an action blockbuster.
There's a clear "big bad guy vs. underdog good guy" vibe, plenty of
action, and some veterans among the B-list cast. The $25 million
budget, although pocket change in Hollywood, shows how badly this indie
film wants to be big. A big film, however, is not necessarily a good
film.

'Ironclad' is at its strongest when it comes to the physical side of
things. It does not shy away from gory violence. Heads, hands and
feet go flying, blood splatters all over the the camera's lens, and
there's a particularly nasty bit involving a man and a catapult. The
weapons feel like instruments of destruction rather than Medieval-chic
accessories, and often succeed in making viewers wince.

The fight choreography is particularly impressive – characters look
like soldiers trying to tear each others' hearts out, as opposed to
actors trying to high-five each other's swords. The action sacrifices
style and appearance for physicality and brutality, which results in a
refreshing level of authenticity.

The 13th century England recreated looks good enough to fool anyone but
a history buff. Giamatti and Cox play their roles with conviction and
succeed in getting the story moving. Giamatti is particularly
watchable, playing King John as an unhinged sadist.

The narrative is where 'Ironclad' falters. Fully aware that the film is
essentially about a group of soldiers in a building, the writers have
tried to spice things up. One of the rebels (James Purefoy) happens to
be a Templar Knight. He regrets killing people for God, so he goes on a
diet of silence and chastity, the latter of which is tested (of course)
by the lady of the castle (Kate Mara). These are ill-advised attempts
at emotional content and only serve to distract from what should have
been a simpler, more polished affair.

Regrettably, the filmmakers decided to emulate that most
repulsive staple of modern action blockbusters – the shaky-cam.
Specifically namechecking 'Transformers 2' and the 'Bourne' sequels as
influences (not a good sign), they decided to shake the picture to
create "a very real sense of action".

What is achieved instead is a very real sense of frustration every time
the action is made unnecessarily incoherent. Once again, the "Michael
Bay Effect" has ruined a film that would have otherwise looked
excellent, and wasted the work of an obviously talented action
choreographer.

Despite its flaws, fans of mud'n'blood, hack'n'slash mini-epics will
find plenty to like in 'Ironclad'. It is comparable to 'Robin Hood'
despite costing $130 million less to make. Director Jonathan English
wanted to create an action blockbuster. In terms of scale and ambition,
he has succeeded. But blockbusters aren't perfect, and neither is this.