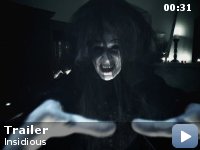 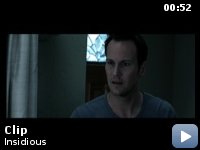 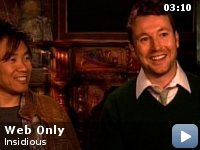 A family looks to prevent evil spirits from trapping their comatose child in a realm called The Further.

Storyline
A gripping story of a family in search of help for their son, Dalton, who fell into a mysterious coma on one ordinary morning. Little do they know that there is much more to this endless sleep than meets the eye as they explore the paranormal, and rediscover the past; the key to getting their son back once and for all.

Taglines:
It's not the House that's Haunted.

The mask Elise puts on to enter the world of dreams is the same as the mask used by the the Sandman, the master of dreams, in the comic book series of the same name, created by Neil Gaiman.

Errors made by characters (possibly deliberate errors by the filmmakers):
When Elise first sees the demon, she describes him to Specs as having eyes, that are "like two black holes," and has him draw a picture as such. Also, Dalton's picture of the demon has a being with a red face and two completely dark spots for eyes. However, when the demon appears in person, his eyes are mostly white with tiny black pupils.

Renai Lambert:
Hey, sweetie. What are you doing up? Come here.

Renai Lambert:
No? That's okay. You know, you're still getting used to it. I can't sleep either.


I went into this movie confident that it would be a cheesy, campy romp
with the same "tried and true tricks of the trade," like when the hero
is investigating the creepy music coming from the basement and a cat
jumps into frame, but I quickly discovered that this would not be case
with Insidious. After watching the move and obsessing on it for about
12 hours now, I can honestly say it's one of the scariest movies I've
ever seen. In fact, there were several points during the film where I
screamed like a 13-year old girl at a Justin Beiber concert. Keep in
mind I was consciously trying my hardest to keep my composure, mainly
because I was sitting beside my new girlfriend of 2 months. She,
incidentally, didn't make a peep; thankfully, I later found out she had
her eyes closed the whole time.


I was also expecting to see some blood and guts, especially coming from
the guys who made Saw, but there wasn't a drop. Instead, they used just
about everything else in their arsenal to scare the bejesus out of me
and everyone else in the theater (my girlfriend included). From
literally the opening credits, they created an intense, haunting
tension that didn't leave my body till several whiskeys and half a
Xanax later. And the movie constantly feeds that tension, making even
the characters' mundane family life somehow seem utterly terrifying. I
was actually exhausted leaving the theater from all of the
uncomfortable squirming I was unable to control. I'd say it's the most
calories I've ever burned while watching a movie (well, at least a
PG-13 movie).

Overall, the movie was great. It was crazy scary, thoroughly
entertaining, and even surprisingly funny at times. Having said that,
it will be quite some time before I watch another horror movie; I have
no desire to be turned into a frazzled bundle of nerves again anytime
soon. So, if you plan on seeing this movie, please consider this a
cautionary reminder: it's probably best to go with someone who's
already witnessed you have a complete physical and mental breakdown, so
as to avoid an embarrassing drive home. And maybe bring a Xanax as
well.