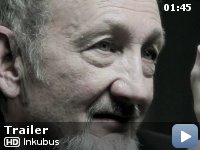 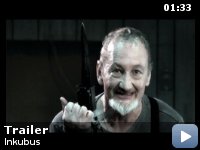 Storyline
Inkubus tells the story of a skeleton crew working the final shift at a soon to be demolished police station. The night takes a gruesome turn when the demon, Inkubus, calmly walks into the station holding the severed head of a murdered girl. Inkubus toys with the crew, allowing himself to be restrained, and begins to proudly confess to his litany of crimes, some dating back to the Middle Ages. Why? Inkubus has a score to settle with the one detective that almost put him away some thirteen years ago. To their dismay, the cops quickly become pawns in Inkubus' brutal crowning achievement of murder, gore, and mayhem. They ultimately realize it's his world, they only die in it.

Taglines:
We all must face our demons.

A very low budget but watchable horror movie that is only that way because of the cast. Freddy Kruger makes it OK. I say C+


"You can't pull that trigger, you can't even move. There's nothing you
can do about this." While working at a police station on it's last day
the few cops that are left begin to question a young teen on his
girlfriend's murder. When a stranger walks in holding her severed head
the night takes a wicked turn and they wonder if the stranger is an
Inkubus out for revenge. This is a movie that will very much appeal to
horror fans, and that may be it. The movie is just one step above a
movie made for cable TV and if it weren't for the cast it would have
been that. I'm not saying that the cast and acting are great but the
fact that Freddy Kruger is in this adds a level of creepy that actually
helps the movie. The budget is very very low and the film quality is
blurry at times. 95% of the movie takes place in a very plain and
boring station but that actually helps the movie I think. Overall, not
really impressed at all but worth watching for the cast or if you are a
huge horror movie fan. I give it a C+.