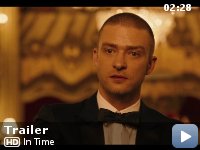 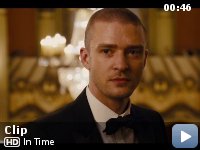 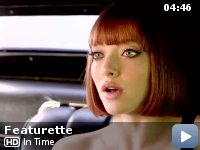 In a future where people stop aging at 25, but are engineered to live only one more year, having the means to buy your way out of the situation is a shot at immortal youth. Here, Will Salas finds himself accused of murder and on the run with a hostage – a connection that becomes an important part of the way against the system.

Storyline
Welcome to a world where time has become the ultimate currency. You stop aging at 25, but there's a catch: you're genetically-engineered to live only one more year, unless you can buy your way out of it. The rich "earn" decades at a time (remaining at age 25), becoming essentially immortal, while the rest beg, borrow or steal enough hours to make it through the day. When a man from the wrong side of the tracks is falsely accused of murder, he is forced to go on the run with a beautiful hostage. Living minute to minute, the duo's love becomes a powerful tool in their war against the system.

While the movie was about people who would look 25 years old until they die, Amanda Seyfried is actually the only significant character who was 25 during filming.

Errors in geography:
At the climax of the movie, the lead characters run away from downtown Los Angeles (7th Street and Anderson) and immediately make their way to the deserted roads around Los Angeles International Airport, some 10 miles away.

Sylvia Weis:
Will, if you get a lot of time, are you really gonna give it away?

Will Salas:
I've only ever had a day. How much do you need? How can you live with yourself watching people die right next to you?

Sylvia Weis:
You don't watch. You close your eyes. I can help you get all the time you want.

Live forever or die trying. Justin Timberlake and Amanda Seyfried star
in the new sci-fi action film "In Time". Will Salas (Timberlake) and
Silvia Weis (Seyfried) live in a futuristic world where time is the
currency. In this world, people stop aging at 25. Once they turn 25,
they only have one year to live, unless they find a way to get more
time.


Will lives in the ghetto where people constantly are timing out
(running out of time and dying), while Silvia lives in New Greenwich
where people have centuries. It's extremely dangerous to have too much
time; those with centuries are usually accused of stealing and are
immediately killed.

When Will is accused of murder, he takes Silvia hostage and they run
from the timekeeper (Cillian Murphy). Several times, they find
themselves cutting it close with only seconds left on their clocks.

The concept is extremely unique and innovative, which made me think it
was going to be an "Inception"-type film. However, it was disappointing
to see "In Time" fall short of my expectations. It pains me to say
this, but Justin Timberlake should not have been chosen for the role of
Will Salas. He just can't pull off the character of a tough guy from
the ghetto. Amanda Seyfried is decent as Silvia, but she and Timberlake
don't have much chemistry.

I also don't think the script was very well written, which causes
Timberlake and Seyfried to be even less believable as their characters.
In addition, the characters are not developed enough; it's difficult to
get a sense of whom these people, from opposite worlds, really are.

I found myself checking my watch multiple times throughout the movie. I
was distracted and the movie felt much longer than it actually is. For
all of these reasons, I give "In Time" a 6 out of 10. Great idea.
Poorly executed.