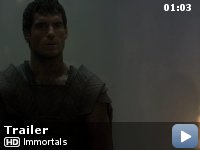 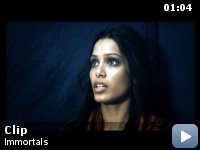 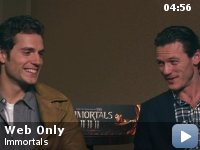 Theseus is a mortal man chosen by Zeus to lead the fight against the ruthless King Hyperion, who is on a rampage across Greece to obtain a weapon that can destroy humanity.

Storyline
Eons after the Gods won their mythic struggle against the Titans, a new evil threatens the land. Mad with power, King Hyperion (Mickey Rourke) has declared war against humanity. Amassing a bloodthirsty army of soldiers disfigured by his own hand, Hyperion has scorched Greece in search of the legendary Epirus Bow, a weapon of unimaginable power forged in the heavens by Ares. Only he who possesses this bow can unleash the Titans, who have been imprisoned deep within the walls of Mount Tartaros since the dawn of time and thirst for revenge. In the king's hands, the bow would rain destruction upon mankind and annihilate the Gods. But ancient law dictates the Gods must not intervene in man's conflict. They remain powerless to stop Hyperion…until a peasant named Theseus (Henry Cavill) comes forth as their only hope. Secretly chosen by Zeus, Theseus must save his people from Hyperion and his hordes…

Taglines:
The Gods Need a Hero

Director Tarsem Singh described the film as being "done in Renaissance painting style".

Factual errors:
The name Stavros used for a character was not an ancient Greek name. Stavros is a Christian name. Stavrós means cross in Greek. This name is derived from the cross of Jesus.

I read quite a lot of good reviews so I was pretty excited when I when
to watch the film. Unfortunately it was one of the worse films I've
ever seen. If you know even a few things about Greek mythology then do
NOT watch it. I didn't expect them to follow it completely but since
they are using the names of heroes and gods they could at least use
their background.

Second there were 12 gods not 6 and I've never heard of Zeus killing
any other god or about the law of not interfering with humans. Gods
loved to "play around" with people.

Third: as soon as I saw the so called Titans I felt like leaving the
theater. The last time I checked, they were not blue people who jump
around like monkeys and have no intelligence.

Fourth: I am not a racist. I have friends from all around the world but
using an Indian actress as Phaedra and black people for warriors feels
out of space. I repeat I am not a racist but in a film "based" on Greek
mythology they could at least use actors that resemble the people of
the country and since the priests were talking in "Greek", they could
at least make it sound like Greek. It took me some time to realize they
were not talking in an alien language and when I did, I still read the
subtitles to understand what they were saying, even though it is my
first language.

I do not want to over analyze the mistakes concerning the mythology but
I have to day that Phaedra was not a priest but a princess and Theseus
definitely did not bury his mother in the labyrinth of minotaur which
is in Crete, minotaur was not a man with an iron mask on his head and
Theseus did not follow his own bloody traces to leave the labyrinth.

I could write pages about mythology but I will stop here. Other than
that, I did not really enjoy the fights much. I must say that some of
them were amazing but most of them concentrated on showing too much
blood. If you enjoy watching people chopping off body parts and
literally smashing people into nothingness in slow motion then this is
a film for you.

Also, there was not depth in the characters. They are all shallow and
you can easily guess what their choices they will make or how they will
react to certain situations. The same goes with the plot. The ending is
pretty much known from the beginning there is no mystery at all. We
learn everything in the first 20 minutes and then just watch several
fights until the end.

All in all, the makers just used some "famous" names from the Greek
mythology and created a lot of violent fights in an attempt to gain the
attention of the viewers.

TagsCanada Greece
Take Shelter
The Woman in the Fifth