I Spit on Your Grave 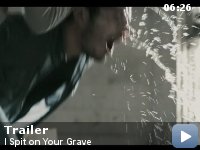 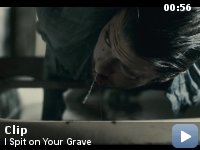 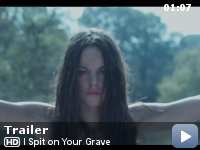 A writer who is brutalized during her cabin retreat seeks revenge on her attackers, who left her for dead.

Storyline
Writer Jennifer Hills (Butler) takes a retreat from the city to a charming cabin in the woods to start on her next book. But Jennifer's presence in the small town attracts the attention of a few morally depraved locals who set out one night to teach this city girl a lesson. They break into her cabin to scare her. However, what starts out as terrifying acts of humiliation and intimidation, quickly and uncontrollably escalates into a night of physical abuse and torturous assault. But before they can kill her, Jennifer sacrifices her broken and beaten body to a raging river that washes her away. As time passes, the men slowly stop searching for her body and try to go back to life as usual. But that isn't about to happen. Against all odds, Jennifer Hills survived her ordeal. Now, with hell bent vengeance, Jennifer's sole purpose is to turn the tables on these animals and to inflict upon them every horrifying and torturous moment they carried out on her…

Roger Ebert gave this film zero stars as he did with the original film.

Factual errors:
Louisiana has parishes instead of counties, therefore, no county sheriff.

Jennifer:
So was I.

I just saw the free screening. I'm glad I didn't pay to see it. Yes,
it's that bad. It is utterly pointless, horridly acted trash, a good
definition of pornography.

Now I know we don't go into a film called I Spit On Your Grave
expecting Oscar worthy performances or brilliant dialogue, but we also
don't go into such a movie expecting to yawn, which is what I did at
least a couple of times. I saw the original back in 1978 at a Drive-In.
Despite how controversial it was and how Roger Ebert ripped on it, I
always thought of it as a really well made motion picture. The acting
is decent, the atmosphere is creepy and the minimalist plot is well
written. The original film engages because we believe the characters
are human and we believe something this horrible could actually happen.
This is not the case with the remake.

There are some major flaws that make this one too implausible to enjoy.
Discussing the flaws of a movie with a plot that goes no farther than
"men rape woman / woman kills men" cannot be done without including
spoilers, so if you really care that much about the details of the rape
and murders, stop reading this review.

First of all, the men in this movie are so immoral and have such a lack
of conscience that they can't be related to whatsoever. In the
original, Jennifer comes back to actually seduce the men before she
murders them, and this is very telling about the men's characters. The
fact that she can seduce them shows us how utterly screwed up they are,
that they have convinced themselves Jennifer actually got some pleasure
out of her rape and even wants some more. This made them somewhat
complex characters, perhaps victims of a macho society, which allowed
us to feel for them on some small level, making the revenge that is
enacted upon them that much more brutal. However, in this crappy
remake, the rapists are absolutely one dimensionally evil, making them
pretty much inhuman objects and causing the retribution against them to
be highly unsatisfying. Plus, in this remake, a fifth rapist has been
added to the plot—the county sheriff no less. A sheriff with a wife and
young daughter joins in on the sadistic torture of a young woman and we
are offered no motivation for this, other than of course he's a
redneck, so he must like to participate in forced anal sex, a standard
set by the movie Deliverance. And all of this takes place as if it is
daily routine, with no regrets or remorse. The character of the sheriff
is so unbelievable that it subtracts from the film as a whole.

Another big flaw is the Jennifer character herself. In the original
movie, she goes back to the city, recovers (an important aspect because
then the revenge she seeks is much more premeditated), becomes
empowered and returns to the scene of the crime to murder the villains.
She arises as a hero because we get the sense that what she is doing is
not merely personal revenge, but something that is necessary in order
to keep something like that from happening to someone else, like
putting a rabid dog down. But in the remake, we are suppose to believe
that Jennifer dives into some water, magically disappears (was she a
swimming champ?), is not seen for a month (during which she is
supposedly living in an abandoned shack eating rats and snakes I
suppose), and then suddenly comes out of the woods to enact a very
intricate series of torturous murders. And she doesn't seduce her
rapist into the bathtub to cut off the offending member, she relies on
the old Hollywood cliché of whacking him over the head with a tire iron
so that he conveniently passes out for an hour without a struggle, sort
of like a cartoon character does, as this frail women who was beaten
and raped and has been living in the woods for a month somehow drags
him away and props him up into a contraption straight out of Saw part
whatever. All of this is so unbelievable that by the time the brutality
begins we don't really care. It is very hard to get any satisfaction
out of a revenge film when it isn't taking place in the real world.

And about the revenge murders. They are way too literal. The guy
obsessed with her teeth gets his teeth pulled out. The guy with the
video camera gets his eyes plucked out. The guy who gives us the
gratuitous anal sex scene gets a shotgun shoved up you know where. This
Jennifer hasn't recovered. She's not empowered. She's become her
assailants. Her revenge is not for the protection of the world; it's
for the ego of the screenwriter. There is nothing shocking about the
murders because we don't care about the characters and we don't believe
Jennifer could pull them off to begin with.

In the absence of good acting, believable plot and character
development, what we are left with is about two hours of brutal rape
and torture. That's not filmmaking. That's just lazy. That's just
trash. As audiences become more and more desensitized to this kind of
trash, where is the future of horror films headed? Rape in 3D? After
the long drawn out rape scene, the woman sitting next to me got up and
left the theater. For a moment, I thought it was because she was so
shocked by what she had just witnessed, but in a few minutes she
returned with an order of nachos. You just have to wonder.

If you want to see a really creepy, well-acted movie about a young
woman exacting revenge on a sexual deviant, watch Hard Candy, an
extremely well written and believable film. I Spit On Your Grave
(Unrated) is pure garbage compared to that.

TagsUSA
Ong Bak 3
The Way Back