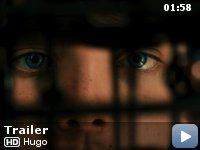 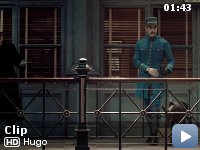 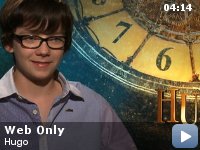 Set in 1930s Paris, an orphan who lives in the walls of a train station is wrapped up in a mystery involving his late father and an automaton.

Storyline
Hugo is an orphan boy living in the walls of a train station in the 1930s in Paris. He fixes clocks and other gadgets as he learned to from his father and uncle. The only thing that he has left that connects him to his father is an automaton that doesn't work; Hugo has to find its heart-shaped key. On his adventures, he meets with a cranky old man who works in the train station and his adventure-seeking god-daughter. Hugo finds that they have a surprising connection to his father and the automaton, and as he discovers it, the old man starts remembering his past and his significance to the world of film-making.

During the early scene which introduces the interior of the train station, there are appearances by characters representing Django Reinhardt, James Joyce, and Winston Churchill.

Factual errors:
La Tour Eiffel, or The Eiffel Tower in English, was (and still is) the tallest structure in Paris. Yet when Hugo and Isabelle are at the top of the clock tower at the station, the camera clearly looks DOWN at the top of the tower.

Station Inspector:
[to his dog while in the bath]
If he is deceased, then who has been winding the clocks?
[cut to reveal that the Inspector and the dog are in the bath together]

Hugo is a beautifully made movie with great 3D effects. Yet with the
misleading advertising, the story that goes nowhere, and with over 2
hour runtime it is one hell of a boring movie.

Please do not believe 8.3 IMDb and 94% RT ratings, this movie one of
the most overrated movies in the history of the film, the word
'history' is the key one here. When everything is said and done Hugo
reveals itself as nothing but a cleverly disguised homage to one of the
French pioneering movie directors, a subject interesting primarily for
the movie history buffs.

As I said Hugo is hugely misrepresented in advertising. Every poster
tells you that some Narnia type adventure is awaiting you. All the
trailers were masterfully crafted to leave you with expectation of
magical miracle. The words like 'quest' and 'mystery' are a part of
Hugo's brief description on each and every site, just read what it says
on IMDb. Furthermore the word "adventure" is lavishly sprinkled
throughout the Hugo's first part. And yes, great Martin Scorsese is
behind all of it, so what should you expect but a magical adventure on
a grandeur scale ?

Sorry, you will get none of that. Yes, Hugo is like a charming 3D
French postcard, but its not worth looking at for over 2 hours. 3D
effects are well done, yet absolutely not required for this story that
never leaves the setting of Paris train station.

While plot has some holes, the elephant in the room is that pretty much
nothing happens in the movie with all these mechanical dolls, golden
keys, and the visually rich Dickensian atmosphere. And be sure, there
is absolutely no magic, or any type of adventure hidden here.

I am giving Hugo just one star to counter misleading ads and all those
hypists that ether work for the studio, or easily hypnotized by big
director's name. Please have few good games on your smartphone and
bring a thermos with coffee if you decide to go see this snoozefest,
you will need it.

TagsFrance Paris
How to Stop Being a Loser
X: Night of Vengeance