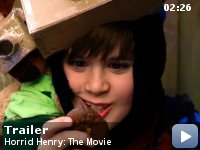 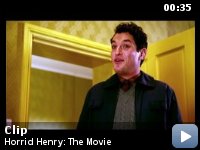 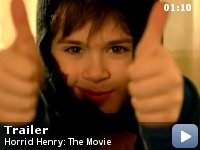 Horrid Henry finds himself doing things he never ever thought he'd do, and then some.

Storyline
When Henry fails yet again to hand in his homework for the umpteenth time, he has no idea that this will set off a chain of events which will see him forming an unlikely alliance with Moody Margaret, the infuriating girl next door, and his irritating little brother Perfect Peter, outwitting corrupt School Inspectors and toppling an evil Headmaster, winning a talent contest and facing his ultimate nemesis with no way out – all because he is trying to save the very school which he has always professed to hate!

This film marked the first-ever feature performance of actress Scarlett Stitt in the role of Moody Margaret, Henry's friendly nemesis.

a waste of the talent as its disposal


I took my 8 and 6 year old children. My 8 year old is usually quite
forgiving of a bad film if she has popcorn, but when she asked me if I
had liked it she was clearly hoping I said 'no'. We are film addicts
and watch and enjoy a lot of children's films – this was the worst for
a long time, since Space Chimps probably, and made worse by that it
could have been so much better with a little craft to its direction.
And from a director with so much experience as an Editor, it was really
badly edited.

My 6 year old thought it was OK, but there lies the problem – the film
is obviously aimed, in its semi-high-school American 'teen rock' music
pretensions, at a much older audience. A porous plot, even to an 8 year
old, and the embarrassing potential of the cast falls extremely flat.
Mathew Horne seems only to have two expressions in his repertoire and
is in extreme danger of having a bit part comedy career fade fast, and
Anjelica Huston's Scottish accent was insulting and embarrassing – like
a sheltered American impersonating Mrs Doubtfire. Horrid Henry had been
clean cut and Americanised, and really wasn't very menacing at all. I
was surprised we were spared the sentimental 'son, I got it all wrong
but I will always love you' ending: it would have completed the
American airbrushing.

TagsOK
The Art of Getting By
The First Grader