Hobo with a Shotgun 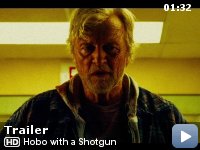 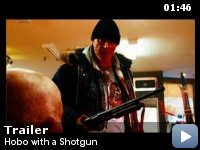 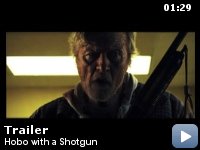 A homeless vigilante blows away crooked cops, pedophile Santas, and other scumbags with his trusty pump-action shotgun.

Storyline
A vigilante homeless man pulls into a new city and finds himself trapped in urban chaos, a city where crime rules and where the city's crime boss reigns. Seeing an urban landscape filled with armed robbers, corrupt cops, abused prostitutes and even a pedophile Santa, the Hobo goes about bringing justice to the city the best way he knows how – with a 20-gauge shotgun. Mayhem ensues when he tries to make things better for the future generation. Street justice will indeed prevail.

Taglines:
Delivering justice, one shell at a time…

Based on a fake trailer made for
Grindhouse.

Revealing mistakes:
Where Slick is about to saw at Abby's neck, the blade on his saw is quite shiny and obviously real, in the next shot when he holds the blade to her neck the blade is quite dull and flexes obviously, as it is made of rubber.

Hobo:
Get your hands off me, demons! You're crushing my smokes!

Eisener's exploitative 80's grindhouse throwback, "Hobo with a
Shotgun", showcasing its brutality shamelessly, is easily the best
grindhouse film to ever grace the silver screen. "Grindhouse",
"Machete", and "Drive Angry 3D" are all strong staples to the beloved
subgenre, but "Hobo" is where its at. It's bigger, louder, and prouder.
In all honesty, this is one of the goriest films I've seen in a while,
and it takes a lot for me to say that because even the goriest Saw film
doesn't fulfill my bloody craving. The best part about "Hobo" is not
only doesn't it play it safe, but there's so much meaning, and depth
underneath it, and is executed so strongly that the message never
becomes lost or preachy.

"Hobo" revolves around well… a hobo. An anonymous one at that who
witnesses the catastrophes of the city, and decides to fight back.

First of all, the plot is just ingenious. A hobo who's tired of getting
picked on and besmirched by the townspeople decides to take a stand.
Not only is it a badass story, but can't we all relate to the plot?
Haven't we all been pushed around too long, and just wanted to do
something. To be something truly special. Also, while the deaths are
pretty sick, there's more meat on these bones. The film relies on what
a film should rely on. Its characters. The relationship between Abby
and the hobo is a strong one. I actually cared about these two. What
does it say if a film of the title "Hobo with a Shotgun" has more
character development than 95% of the garbage being released today?

To put the icing on the cake, the production values are sweet. This
film has a superb nostalgic look, and it's one of the most colorful and
vibrant movies projected on screen. But why are we here? For the
deaths! And boy, do they not disappoint. Eating glass, decapitating
heads, and shots to the head are not even the goriest segments.
Actually, they're the tamest. Not only that but almost every five
minutes there's blood. Whether a dead body in a shot, random blood, or
a kill occurring. This is just a huge blood bath. And a great one at
that.

Also, what I loved about this movie is the lack of gratuitous nudity. I
hate how almost every grindhouse flick has to have the need to throw in
random boobs or sex in the film. I know it's part of the titillation,
but it's rather absurd, and feels out of context. "Hobo" had one scene
exposing those jugs, and it actually fit the mood because of its humor.
However, it was just THAT scene and wasn't littered throughout the
movie.

Ignore those reviewers saying they were "disappointed" because it
wasn't "what they were expecting". If you're expecting a good time,
dammit, you're going to get one. Two strong leads, heaps and heaps of
blood, a slick story, and some solid production values. You're going to
tell me that doesn't even get you excited in the slightest? "Hobo with
a shotgun" might just be the best movie I'll see this year. The others
have just not delivered on what they promised. How sad is it to see a
movie with this title can actually be the best movie of the year, when
probably half of the Oscar choices will be pretentious dribble. Don't
even think about seeing this film. Just do it. Go ahead, I'll wait.