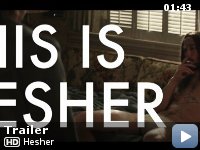 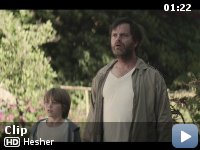 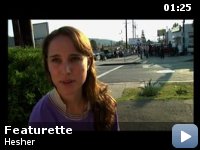 A young boy has lost his mother and is losing touch with his father and the world around him. Then he meets Hesher who manages to make his life even more chaotic.

Storyline
Hesher is a loner. He hates the world and everyone in it. He has long greasy hair and homemade tattoos. He is malnourished and smokes a lot of cigarettes. He likes fire and blowing things up. He lives in his van, until he meets TJ.

Taglines:
Sometimes life gives you the finger and sometimes it gives you…

Elephants make several appearances in the film. Rainn Wilson's character is watching a TV show about elephants and we hear them in the background, the car dealership has a large pink elephant on the roof and beside t.j's bed there is a figurine of another elephant.

Errors made by characters (possibly deliberate errors by the filmmakers):
When Hesher is thrashing around in the pool reenacting a scene from Star Wars, he yells "R2! Shut down all the trash compactors on the detention level!". However, in the original Star Wars movie, Luke is talking to C-3PO on the comm unit, and is yelling "3PO", not "R2".

HESHER—best film I saw at Sundance 2010


I saw "Hesher" at Sundance and your review is so far off the mark it is
unbelievable. "Hesher" IS very original and very funny. It will also
leave a lump in your throat. Believe me, I saw 12 films at Sundance and
"Hesher" was far and away the best. Perhaps your reviewer was confused
because "Hesher" is really both funny and serious and a clever script
nails it on both counts. From the first frame until the ending, there
is not one dull moment and the cast is fabulous. At first, the
character "Hesher" is sort of not likable but the way that Joseph
Gordon-Levitt plays him, with a ' Cary Grant-ish' twinkle in his eye
and his tongue placed firmly in his cheek, you can't help but cheer for
this twisted rocker. The rest of the cast is a really great
ensemble…you want ORIGINAL! They are all playing "against type."
Besides Joseph Gordon-Levitt's captivating performance there is Natalie
Portman, playing a homely looser without self esteem. She is so good
you would never dream that this poor thing is a major movie star. Then
there is Rainn Wilson playing a part so totally different than his
'Dwight Schroot' on the 'Office" that, with the beard he wears, most
people will not even know it's him. He plays a man that is so
devistated by his recent loss that he hasn't really decided if he wants
to keep on living or not. A wonderfully touching performance by an
actor known mainly as a doofus on a TV show. Devin Brochu, who plays
the young boy T.J., doesn't seem like he's acting at all. A great job
of directing by Spencer Susser is evident by the way he has molded this
young actor, with very little experience, into a character who's pain
you can feel. Lastly, kudos are in order for Piper Laurie, the
attractive young leading lady of yore (she played Paul Newman's
girlfriend in the "Hustler") and more recently was the witch of a
mother in "Carrie", who makes the grandmother who is slowly loosing her
marbles, a great friend and confidant of Hesher. The two of them, the
near-Alzheimerland grandma and the wild and crazy (like a fox) Hesher
are two very unlikely philosophers that have not been seen before in
any film that I recall. If that is not an ORIGINAL concept I don't know
what is! My suggestion: have your reviewer see it again, this time with
his or her eyes OPEN. Otherwise, you will be missing one of the best
films of this or any year.