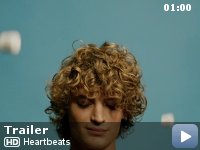 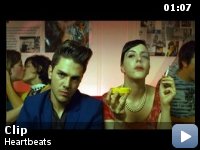 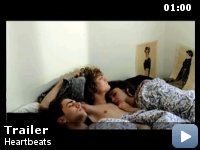 The story of three close friends who are involved in a love-triangle.

Storyline
The story of three close friends who are involved in a love-triangle.

Incorrectly regarded as goofs:
When Nicolas and Marie by accident run into Francis at the Vietnamese restaurant, Francis introduces Nicolas to his friend Antony. However, in the first scene of the movie you can see that Nicolas already has met Antony as they all sit at the same dinner table. There is nothing to say that either Francis didn't realize they knew each other, or that Nicolas and Antony were merely playing dumb and avoiding an awkward situation.

Nicolas:
Seismography. You bore cables and sensors into the ground. You blow it up and you can make maps. Based on the vibrations, you can see what's underground.

Zany and fun, hymn to clueless yet flaming creatures


Young director Xavier Dolan's most recent feature was easily the find
of the London Film Festival for me. Funnily enough I almost walked out,
having come from an extremely dour realist movie (Mike Leigh's Another
Year) and been presented with an extremely stylised and fairly ironic
confection, and thus being quite dysphoric and skeptical. But it really
blossomed out to superb effect. Some critical horses have baulked at
the first fence though! The film concerns young love. The two leads of
the story are both searching for perfect love and attempting to create
the perfect personas to market themselves. Marie is just lovable, she
creates this image where she dresses in vintage fifties clothes, with
hair and makeup to match, sends letters in black envelopes addressed in
gold glitter pen, she reads all the right stuff, including Quebecois
poet Gaston Miron, to impress boys with her intellect. Her friend,
rival and sometimes lover Francis (played by Xavier Dolan himself) is
5/6ths gay (by the Kinsey scale, which is mentioned in the film) and
both are after the same man, Nicolas, who has blond curls and is
straight out of an erotic dream of Cocteau (shots of Cocteau drawings
are edited into the movie at one point).


Love here is all about style, our "heroes" turn up to only the most
fabulous parties, where only exactly the right music plays, Moet flows
generously and where only the beautiful people lounge. Have you money,
looks, wit, are you fun, are you educated, these are the criteria for
these young folk in their quest to get together. Although the alternate
title to the film "Love, Imagined" is accurate in many respects, I
think it underestimates the headiness and the glory of these admittedly
judgemental and narcissistic love throes.

The soundtrack is mostly superb and will be finding its way to my MP3
player. One thing I would criticise though is the repeated use of Bach
Cello Suites played over tepid love scenes, it just comes off as odd.
Dalida's Italian language version of Bang Bang (… you shot me down)
is also repeatedly played and works to much better effect. Favourite
party music for me would be Exactement by Vive la Fête (lyrics repeat
"Adorable Formidable").

I like the refreshing honesty with which people talk in the movie about
love and rejection, one woman saying it takes her a year to get over,
which sounds about right to me (coming up on 11 months myself, with the
end in sight!).

Absolutely loved the ending when Nicolas walks up to Marie and Francis
in the party, won't spoil it but I laughed a lot and had to suppress a
whoop. Definitely a feel good movie despite subject matter that could
be handled in a much more downbeat manner.

TagsCanada
I Am Number Four
51