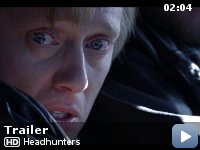 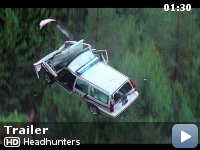 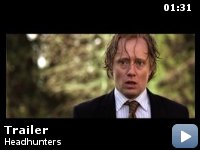 An accomplished headhunter risks everything to obtain a valuable painting owned by a former mercenary.

Storyline
An accomplished headhunter risks everything to obtain a valuable painting owned by a former mercenary.

The film features several references and tributes to Stieg Larsson's Millenium trilogy. Diana watches the second film from the trilogy,
The Girl Who Played with Fire, on TV the night Roger comes home late. Also, aerial shots from
The Girl with the Dragon Tattoo were used to fill in some missing scenes. One of the clips features a car driving over a bridge. The car from
The Girl with the Dragon Tattoo was digitally replaced with the car Roger Brown drives in this film.

Errors in geography:
When Roger Brown returns to Oslo after the car crash he is seen calling from a pay phone in Grønnland Bustterminal, in the next shot he is seen walking over a bridge towards the bus station.


At first I have to say I read the novel of which this movie is based
upon, "Headhunters" by Jo Nesbø, two years ago. A thriller I liked
quite a lot. Usually a novel is better than the film. Well, here Morten
Tyldum (Acclaimed films as "Buddy" and a short in "Most people usually
live in China"), succeeded in making a film just as interesting and
exciting as the book.


Nesbø's writing is interesting. This is most probably who Jo Nesbø's
first movie adaption of his series of novels with Harry Hole will be
directed by Martin Scorsese, on Nesbø's demand – his favourite
director.

Actually I still kept being surprised as the movie went along. Not only
because I can't remember all details in the book, but simply because
the movie has a pace and also from time to time action-clipping which
makes you feel poor Roger Brown's disasters. The handcraft is
beautifully done. As simple as that.

Actually this film was sold to more than 50 distributors in just as
many countries before it even premiered in Norway. Probably both to the
novel writers Jo Nesbø's for the latter years has become world
acclaimed and compared to Stieg Larsson, buy maybe also due to director
Morten Tyldums merits so far. Of course also credit to the producers,
managing to sell on a promise!?

Mark Wahlberg has said he was stunned by the film, and is now to make
an American remake of it, with himself as Roger. Which, of course, is
not at all needed. The original is as good as it gets.

Well, back to the story. Roger Brown is a self-obtained headhunter for
big companies, which has to steal art on the side to keep his woman
happy. Or at least he think he has to do so. He has all the right
connections, until he starts stealing from the wrong guy, while
headhunting him as a new boss to a successful company. A former
mercenary, or different kind of headhunter, he's turning out to be.
When he understands that his greed has gotten him into trouble, he
really finds out what it is, being headhunted.

Both Aksel Hennie and Nicolai Coaster-Waldau is perfectly cast for this
movie. Synnøve Macody Lund does a decent job in her debut-role, as do
the rest of the cast. Fun also to see that real working police-chiefs
are attending the police press conference in the movie. Didn't know
that even was in question. This actually makes both an in-joke as well
as making the plot believable.

It will surprise me if this film doesn't get a remake in Hollywood in
less than two years. Not that is'll be that good, or even necessary.
But that's how the Hollywood-world is, nowadays.

No doubt, the script is good. So is in all aspects the rest of the film
as well. The film is smart, intelligent, surprising witty, and will
engage you all the way through, both as a good story as well as a love
story or a thriller. How much more do you want?

TagsNorway
Turn Me On, Dammit!
The Debt