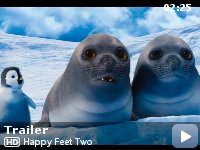 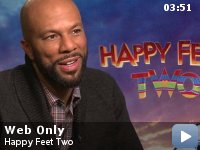 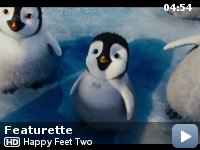 Mumble's son, Erik, is struggling to realize his talents in the Emperor Penguin world. Meanwhile, Mumble and his family and friends discover a new threat their home — one that will take everyone working together to save them.

Storyline
Mumble the penguin has a problem: his son Erik, who is reluctant to dance, encounters The Mighty Sven, a penguin who can fly! Things get worse for Mumble when the world is shaken by powerful forces, causing him to brings together the penguin nations and their allies to set things right.

Incorrectly regarded as goofs:
One of the characters is a puffin. Puffins live on the north pole, not the south. However the story describes how the puffin came to be in Antarctica.

Bill the Krill:
What's happening, Will!

Will the Krill:
It's the wave of change, Bill! We've got to get on the ride!


Mumble, The Master of Tap, has a problem because his tiny son, Erik, is
choreo-phobic. Reluctant to dance, Erik runs away and encounters The
Mighty Sven: a penguin who can fly! Mumble has no hope of competing
with this charismatic new role model. But things get worse when the
world is shaken by powerful forces. Erik learns of his father's "guts
and grit" as Mumble brings together the penguin nations and all manner
of fabulous creatures-from tiny Krill to giant Elephant Seals, to put
things right. — (C) Warner Bros


I thought HAPPY FEET was pretty great. The film was foot-tapping fun
and the dark turn it took in the third act, while unexpected, made it
edgy and different for me. When a sequel was announced, I thought it
seemed unnecessary. How far can you really stretch the premise of
penguins who can dance and sing? Apparently, not that far. After
viewing the sequel, it very much does seem unnecessary and wholly
forgettable within ten minutes after you walk out of the theater, which
is disappointing to say the least. Other than this, the main problem
with HAPPY FEET 2 is that there aren't that many good musical numbers
as compared to the first one. Most of them are pretty mediocre.
However, there are probably around three that range from good to great,
one of which uses the song "Under Pressure," which is easily the best
number in the entire film.

Another problem I had was the dark tone of the film. It's a bit TOO
dark, if you ask me. You see the younger penguin characters constantly
be put in danger which made the film very uncomfortable to watch, and
what these characters go through in the film would probably traumatize
them for life. The film also suffers from messy storytelling. For
example, the subplot with the shrimp characters (voiced by Matt Damon
and Brad Pitt) seems to come from nowhere and is out of place from the
rest of the film. It also doesn't help that the characters are so damn
annoying. As for the 3D, it's put to good use in some places but,
overall, it's really unnecessary. The one good thing I can say about
the film is the look of it, which is very beautiful. I also liked Pink
a lot, who gives a boost for all the musical numbers she sings in,
along with Robin Williams, who has a few great jokes up his sleeves.

Overall, HAPPY FEET 2 is a disappointment considering that I am a fan
of the first film. Director George Miller doesn't seem to have his
heart in the right place for this sequel compared to the first film.
However, the film is slightly better then CARS 2 if that says anything.

TagsAustralia Sydney
The Woman in the Fifth
Hugo