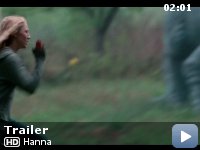 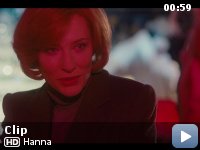 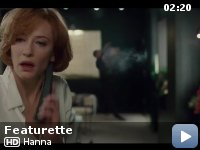 A 16-year-old who was raised by her father to be the perfect assassin is dispatched on a mission across Europe, tracked by a ruthless intelligence agent and her operatives.

Storyline
Hanna (Ronan) is a teenage girl. Uniquely, she has the strength, the stamina, and the smarts of a soldier; these come from being raised by her father (Bana), an ex-CIA man, in the wilds of Finland. Living a life unlike any other teenager, her upbringing and training have been one and the same, all geared to making her the perfect assassin. The turning point in her adolescence is a sharp one; sent into the world by her father on a mission, Hanna journeys stealthily across Europe while eluding agents dispatched after her by a ruthless intelligence operative with secrets of her own (Ms. Blanchett). As she nears her ultimate target, Hanna faces startling revelations about her existence and unexpected questions about her humanity.

Taglines:
Innocence can be deadly.

The song that Isaacs (Tom Hollander) whistles is "The Devil Is in the Details" by 'The Chemical Brother'.

Continuity:
During the final scene in the amusement park, Marissa is wearing shoes, but at one point she is seen wearing calf-high boots.

Hanna:
I just missed your heart.

Wow, was this a waste of money

This film was derivative of many other films including (Soldier,
Resident Evil), with little new in the way of plot. The immoral CIA
creates a program in which they are attempting to genetically create
the perfect soldier by fooling with the DNA of embryos. When the
experiment proves successful (huh..? Why shut down a successful
program..?) it is decided for unknown reasons to end the project and
terminate all those involved. Eric Bana, the CIA field agent who
recruited the women for the experiment has a change of heart and tries
to save one woman and her child. For no particular reason, except to
give Hanna a reason to want revenge later on, the mother is killed by
Kate Blanchett, and Eric Bana escapes with the infant. Bana raises
Hanna as his own in an "arctic" cabin without electricity or modern
conveniences, in order to prepare her for the day that she has to face
the CIA and their henchmen. The day finally arrives when Hanna decides
that she is ready. Bana digs up a transponder he had buried and places
it in front of Hanna quipping that once the switch is flipped it can't
be undone. Since there is no electricity in the cabin, and in fact
Hanna has never seen an electric light, the method by which Bana got a
battery to operate after over 14 years is never explained. Bana leaves
Hanna alone to be captured by the dastardly CIA operatives. He did this
apparently in order for Hanna to kill Kate Blanchett. Why he doesn't
take Hanna with him, instead of leaving her to be taken by the CIA is
left unexplained. Hanna is brought to an underground holding cell, the
size of the Superbowl, in Morocco.


Strangely, Morocco looks a lot like the desert southwest of the US.
Naturally, Hanna is more than a handful for the loutish CIA operatives
and manages to escape through the ubiquitous air-conditioning vents
which just happen to be her size. She makes her way to the surface, and
just as she is looking out of a vast desert vista in broad daylight,
Hummvees start driving directly over her head, apparently oblivious to
the fact that there is an open submarine door in their path. As the
last Hummvee passes the hole is shown as empty clearly showing that
Hanna has managed to take hold of the undercarriage of the last vehicle
as it passed at 50 mph, where she hangs on similar to Robert De Niro as
Max Cady in the 1991 film "Cape Fear". Too bad nobody told the director
about this same treatment by the "Simpsons" with Sideshow Bob. I'm sure
I'm not the only one surprised by the location of Morocco for this CIA
detention cell, instead of somewhere in the US. It becomes obvious
later on when Hanna has the opportunity to show off her dexterity with
languages, which wouldn't have come up in the US quite so easily. Also,
since it was decided by the Director to have the final fight scene in
an amusement park in Germany, the CIA detention center had to be
someplace from which Hanna could conceivably get to Germany, without a
passport or any ID.

At one point in the film Eric Bana picks up a post card at a post
office, apparently where they've been holding his mail for the past 14
years, and there's a postcard from Hanna telling him in code she has
killed Kate Blanchett, which is unfortunately incorrect. How she bought
the stamp, mailed the postcard, or knew which post office Bana would be
near is unexplained. The fact that all of this action takes place in a
matter of a few days, makes the idea that a post card can get from
Morocco or Spain to Germany in that amount of time laughable to anyone
who has lived overseas.

There are several editing or continuity errors, like when Hanna kills
the reindeer with a bow and arrow, but then guts a reindeer of
approximately half the size, and then brings the originally sized
reindeer home on a sleigh, apparently having made the sleigh from the
raw materials by hand.

The choice of where and when to use blood spatter effects is also
interesting. Hanna gets her face splashed when shooting people, and the
picture in front of grandma gets covered when Kate Blanchett kills her
(again for no reason), but the reindeer is remarkably without blood,
even though Hanna is in the process of gutting it.

If you can willingly suspend your disbelief for this film, then you
really have no disbelief to suspend.

The story is derivative, the characters are two dimensional and without
motivation, the lines are full of clichés, and the violence is
unrealistic. Eric Bana is supposed to be the Zen like trainer of Hanna,
but he can't seem to handle a Aryan Brotherhood with a knife. I suppose
12 year old girls will like the scene where Hanna flips a Spanish boy
who tries to kiss her, but her reactions were closer to that of someone
suffering from anti-social personality disorder than of a normal
teenager.

The fact that Hanna kills people for little or no reason would seem to
suggest that she is in fact meant to be characterized as a serial
killer, except that she announces to Eric Bana that she doesn't want to
hurt anyone anymore, when all she really needs to do is to stop hurting
people.

I found it disconcerting that Eric Bana had spent 14 or so years
training Hanna to kill everything that moves, when the CIA was unaware
of his or her actual existence. He could just as easily have changed
his name and raised Hanna on a ranch in Idaho or a tenement in the
South Bronx, but then there wouldn't have been as much of a story, as
such.