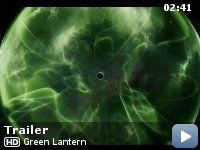 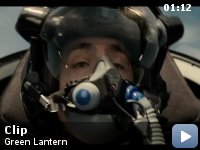 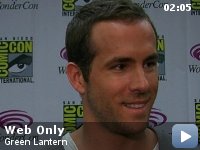 A test pilot is granted an alien ring that bestows him with otherworldly powers, as well as membership into an intergalactic squadron tasked with keeping peace within the universe.

Storyline
A cocky test pilot, Hal Jordan ('Ryan Reynolds' ), acquires superhuman powers when he is chosen by "the Ring", the willpower-fed source of power, of the Green Lantern Intergalactic Corps. He, reluctantly at first, takes on the challenges these superheroes face. Putting his self-doubts aside, and spurred on by his sense of duty and love for his beautiful, intellectually equal, colleague, Carol Ferris (

Taglines:
In brightest day, in blackest night, no evil shall escape my sight, let those who worship evil's might, beware my power, Green Lantern's Light.

The comics vary on why the Green Lantern Abin Sur traveled in a spaceship when his ring could sustain him in space. The early comics say it was to prevent unnecessarily using the power on his ring; later versions presented him with a prophecy that his ring would fail him (which ironically came true at the moment his ship malfunctioned). In the movie, the spacecraft is an escape pod from a larger craft, meant as transport to evacuate a planet.

Tomar-Re:
Billions of years ago, a race of immortals harnessed the most powerful force in existence: the emerald energy of willpower. These immortals, the Guardians of the Universe, built a world from where they could watch over all of existence: the planet Oa…

The critics are way overreacting.


Now let me begin by saying this film is not an amazing film. It is
definitely not an awful film, like most critics are saying. I think
critics might have raised their expectations due to Thor and X-Men:
First Class. They should not compare the Green Lantern with those
films. It is ranked now 24% on Rotten Tomatoes, which is way too low.
It would probably be in the high 60s, if it was released before Thor
and X-Men: First Class.


The acting in the film is good and not terrible at all. Ryan Reynolds
is great as Hal Jordan and extremely likable. He definitely fits the
role as Hal Jordan really well. Blake Lively is great and extremely
sexy, she's not just a pretty face as most are suggesting. Peter
Sarsgaard is a great actor and he plays the villainous Hector Hemmond
really well and interesting. Overall everyone tries their best and at
the end of the day do a really great job, certainly no Oscar worthy
performances, though.

The special effects are pretty superb and extremely worthwhile to say
the least. Although it sometimes feel a little CGIish, but it doesn't
get too big of a distraction. I have to say I was a little disappointed
how Parallax looked like, it felt a little fake at times, but it is not
horrible in any sense of the way. Also the film did not take itself
seriously which is kind of refreshing. Which could be the reason why
critics disliked it so much. They want another sad, personal and
serious story. Unlike Thor and X-Men, The Green Lantern is more kids
friendly.

Overall the Green Lantern was a fun summer flick. Although it is
nowhere near the realm of The Dark Knight, it didn't need to be. The 3D
was actually really good and the special effects were memorable. No
doubt, the critics were extremely tough on the Green Lantern and it is
unfair. At the end of the day, don't listen to the critics. Make up
your mind and see this film. At the end of the day, it should be only
your opinion that matters to you. You might agree with the critics or
you might not. However don't skip this movie because of the low Rotten
Tomatoes score.