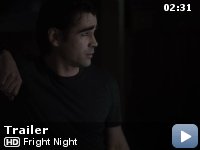 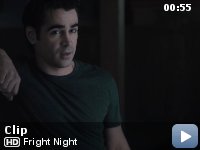 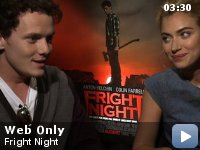 A teenager suspects that his new neighbor is a vampire.

Storyline
A remake of the 1985 original, teenager Charley Brewster (Yelchin) guesses that his new neighbor Jerry Dandrige (Farrell) is a vampire responsible for a string of recent deaths. When no one he knows believes him, he enlists Peter Vincent (Tennant), a self proclaimed vampire killer and Las Vegas magician, to help him take down Jerry.

Taglines:
You can't run from evil when it lives next door.

The props department snuck many Doctor Who references into the Peter Vincent apartment set (for example, Gallifreyen writing – the Doctor's native language – on certain items), as a homage to actor David Tennant, who was playing Peter Vincent and previously played The Doctor. The majority of these references are not visible to the audience.

Audio/visual unsynchronized:
When "Jerry" tries starts the motorcycle outside the house to chase the fleeing car… The motorcycle is a Honda "XL250S" Engine which is a four stroke but it sounds like a "TWO STROKE".

Announcer:
Defy reason. Defy everything you know. A mind blowing experience of the occult and supernatural. Peter Vincent. A magical tour de force. Peter Vincent. Welcome to Fright Night. Onstage at the Hard Rock Hotel and Casino in Las Vegas.


Can a horror remake actually be a good for a change? I mean, how many
classic horror flicks does Hollywood have to crap on until they finally
give up? "Texas Chainsaw Massacre", "Amityville Horror", "Nightmare on
Elm St.", "Friday the 13th", "House of Wax"…….all of these films
are examples of why i sometimes HATE Hollywood.


Finally……a horror remake that's WORTH seeing. I must admit, i had
some pretty low expectations walking into this, and it did way more
than prove me wrong. Initially i thought they were going to make this a
straight 'B' movie by incorporating tons of humor with their gore,
which would have been fine with me, seeing that i love the genre'. But
this movie was more fun than funny. Don't get me wrong, there are some
sequences that are funny, but it had more of that 'drive-in' appeal to
it's horror. And i loved every bit of it.

It's story is pretty basic, and somewhat cliché'. I mean come on, a
vampire living next door. But the weird thing is, it didn't come off as
cliché'. And i think the biggest contribution to that was the pace of
the film. Once you get past the first 10 to 15 minutes of the film,
which are kind of dull, the movie quickly begins to morph into a fast
paced gore fest. And now looking back on it……if it were not rated
R, then this movie would have been stupid, and it would've fit in with
every other crummy horror remake.

But the aspect that i appreciated the most was the writing. For once,
they didn't alter any rules to make their film different. They stuck
with what already works, and left it up to the actors to make these
vampire rules entertaining. And Collin Farrell did just that.

Bottom Line…..Of all the horror movies that come out this year, this
will probably be the one you will have the most fun at. It's funny,
it's somewhat scary, but most of all, it's pretty damn entertaining.
It's one of those movies i would've loved to of seen at the drive-in.
If your tired of all this 'Twilight' crap, which they happen to mention
in the movie itself, then this is really a breathe of fresh air to all
the TRUE vampire fans.