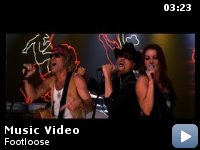 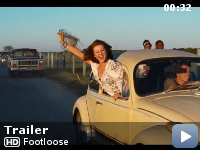 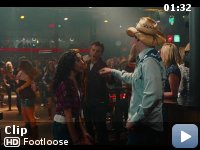 City kid Ren MacCormack moves to a small town where rock 'n' roll and dancing have been banned, and his rebellious spirit shakes up the populace.

Storyline
City kid Ren MacCormack moves to a small town where rock 'n' roll and dancing have been banned, and his rebellious spirit shakes up the populace.

Reverend Moore is obsessed with the children's welfare at "unsupervised dances." Yet in the climactic scene, there are at least two adults present at the dance.

Not as awful as it could have been, but not overly great either


I enjoy bad movies, and enjoy bad remakes even more. So when the
opportunity to get advanced passes to the atrocious looking remake of
Footloose came, I pounced on them just out of the sheer will to see
what kind of monstrosity Craig Brewer and company came up with. The
film had gone through a number of changes, and had plenty of room to
improve on the original. Sadly, I do not think there was ever any hope
for it.


After a horrific accident takes the lives of five high school seniors,
the town of Bomont, Tennessee outlaws a number of activities for the
teenage populace including dancing. Enter Ren McCormack (Kenny
Wormald), a city kid and distinct outsider to the close knit Bomont
townspeople. He is confused by the bans, and after making a few new
friends, sets out to get them abolished.

While the nostalgia factor may cloud the memories of some people, the
original Footloose is really nothing more than a fun diversion packed
alongside an absolutely infectious soundtrack that is still great even
today. It is a fairly silly film really, but with the help of Kevin
Bacon's 1984-era charm and charisma, the film remains a wildly
enjoyable film. Yet somehow, in remaking the film for an audience in
2011, it seems like the filmmakers missed more than a few steps along
the way.

Now I will be the first to admit that this new remake does have a
handful of fun scenes and astonishing dance choreography. The trailers
do a good job of showing off just how great some of the dance moves are
from this new cast, but what it does not let on too much is that most
of these scenes come when they are replicating scenes from the original
film. I basked in the glory of hearing Kenny Loggins blasting, while
watching the various pairs of feet dancing to the beat. And seeing
Willard (Miles Teller) learning how to dance is one of the highlights
of the film, much like it is the original film. A key dance sequence
late in the film is also significantly better than I could have ever
predicted.

But that is where the enjoyment ends.

The rest of the film that surrounds these scenes is dull and lifeless,
moving at a snail's pace and just going through the motions. There is
very little fun to be had, and should someone venture into the film
without having seen the original, they may wonder why anyone wanted to
remake it in the first place. Instead of trying to improve and make the
plot line less ludicrous, the filmmakers left the entire crux of the
film the exact same. They merely changed a few character traits around,
shuffled in some racy dialogue, and took out the tractors and added in
school buses. They sucked out all the fun, and what is left seems like
a mere project that was cranked out with little to no thought for what
audiences may actually perceive to be enjoyable.

Worse yet, the soundtrack is a totally forgettable affair. While it is
the crucial element of the original film, it feels like a largely
laughable affair here. I was originally intrigued at the idea of the
film containing all the original songs, albeit covered by new artists.
But somehow, all of the catchiness of the original tunes seems to have
been stripped from these new ones. Instead, we are left with versions
that have a country twang or overtly urban feel to them, and absolutely
no reason to want to listen to these new versions ever again. I would
be lying if I did not think the most memorable tracks in the film were
the two original ones that somehow were deemed okay to fit into the
film. I would register a guess that this is the influence of Brewer,
who is best known for Hustle & Flow and Black Snake Moan. He has a
distinctly Southern taste to his body of work, and practically forces
it on this film. But in forcing this ideology, alongside two completely
different genres of music, he crushes the film into submission, leaving
many scenes an absolute mess.

The acting in the film is even more disappointing. Dennis Quaid looks
embarrassed in every scene he is in, overacting as much as he possibly
can to forget that he is in the film. Andie McDowell looks like she
wandered in off the wrong set, and just decided to stick around as a
background character. Wormald is a poor substitute for Bacon, and is an
even worse lead for a major motion picture. I realize he is a dancer
first and foremost, but leaving him to carry this film was an awful
decision. He looks frightened and confused for the majority of the
film, and quivers through most of his lines. He lacks Ren's charm, and
is never believable when he rebels against authority. You want to
believe in this character, but all you will do is laugh at how
staggeringly bad Wormald's performance is. Julianne Hough, the female
lead, at least attempts to act. She comes close to a breakthrough in
more than one instance, but she comes off a bit too amateur for her own
good. She makes a great dance partner for Wormald, but for what little
shred of chemistry she has, it is made totally moot when he opens his
mouth.

What redeems the film from being the awful travesty it should be is
Teller's performance as Willard. The moment he walks on-screen, he has
an energy to him that is simply unmatchable. He is the single best
thing about the film, embodying the innocence, spirit and fun of Chris
Penn's original performance. If you venture into this remake, see it
for him and ignore the rest. You may find some remotely enjoyable
experience buried in there somewhere.