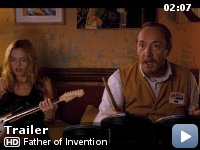 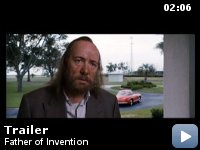 After 8 years in prison, inventor Robert Axle struggles to win over his estranged family and catch up on current technology as he works to once again become the king of the infomercial.

Storyline
Robert Axle, an eccentric inventor turned ego maniacal infomercial guru, loses it all when one of his inventions maims thousands of customers. After 8 years in maximum security prison, Robert is ready to redeem his name and rebuild his billion dollar empire. But first, he must convince his estranged 22-year-old daughter to let him live with her and her quirky, over-protective roommates.

If you find yourself coming to IMDb for a sneak peek at your next movie
outing, please remember this rule: reviewers who vote a film 8* or
more, if they have only one, or two at the most, reviews posted .. are
probably what the industry calls "sponsored reviewers" or, in layman's
terms, "professional bullsh**ers".

Unfortunately Father of Invention is one of those titles that the
parent studio feels needs sponsored reviews, as you can see for
yourself if you browse the few reviews here on IMDb (just click on the
Author's name in the review); the film isn't terrible, but apart from
Kevin Spacey doing his best, there really isn't much of a story to keep
it afloat.

Rober "Bob" Axel has just come out of jail for marketing a faulty
product (whait, what? do corporation chairmen go to jail for that? this
film must be set in a parallel universe where criminal charges apply
differently than real-life US), and he has to start again from the
bottom rung of society, trying to rebuild all he lost, including his
family, car, friends, and all that upper-crust stuff. He fails.

That's about it for a pretty mediocre film, with a very diminutive
script, truly awful supporting characters, middle of the road acting,
and lacklustre direction; Spacey is good, but the constraints of a
unimaginative ..everything .. leave him no space to shine.

Avoid this film if you can, there are too many boring and
inconsequential filler scenes in it to make this an easy sit-through,
even with friends. Instead, do go see something else out this week,
like Soldier Spy, Machinegun Preacher, 50/50, 1911, Heavy Times, or the
superb Drive. Anything really, but not this. Or Melancholia.