Fading of the Cries 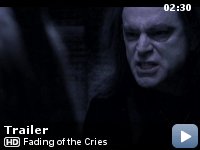 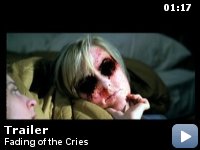 Jacob, a young man armed with a deadly sword, saves Sarah, a teenage girl, from Mathias, a malevolent…

Storyline
Jacob, a young man armed with a deadly sword, saves Sarah, a teenage girl, from Mathias, a malevolent…

Continuity:
When Sarah and Jacob cross the water they are knee deep. Moments later they are approaching the covered bridge and the bottoms of their trouser legs are not wet.

Michael:
June 17th. It has been several months since the death of my wife and daughter. I ask God every day why they were taken from me with one swift blow. I'd begun smoking again – an invitation for death with arms wide open. I free more alone in this world than ever before.

Fading of the Cries is inconsistent. It packs a punch, but only in
certain parts, most noticeable the third act. That is the whole problem
with this film from beginning to end. Its biggest weakness – the
acting, hands down. Leads, newcomer Jordan Matthews and ER's Hallee
Hirsh, who play Jacob and Sarah, both have a serious lack of any
chemistry whatsoever and one tends to get quite annoyed at Jordan
Matthews at times when he reads off dull monotonic lines with no
expression, as if reading from a script on the spot. As an actor
myself, I notice he tends to fall into numerous acting traps that many
amateurs first do – namely not enough practice/experience. Actress
Hallee Hirsh tends to overact all of her scenes with an overabundance
of annoyance, maybe overcompensating off her lead who is giving her
nothing to work with. I've read reviews stating similarities to both
Twilight and The Crow. Here's my two cents: Say what you will about
Twilight, there was strong chemistry there between Edward and Bella
that you could feel. That's what that film did right and this ain't no
Twilight. What Brandon Lee did correct about The Crow was giving his
character a sense of pain and emotion. I get nothing from Jordan
Matthews. Then again, he could be going for the stereotypical action
actor without any acting talent in which case I would state to learn
how to walk properly without doing the duck butt sticking out and
you're there.


Genre favorite Brad Dourif and even Mackenzie Rosman, on the other
hand, managed to pull off decent performances. Brad plays the
antagonist of the film with such precise clarity that one almost feels
bad he has almost nobody to play with scenewise. It shows what happens
when you compare someone of his caliber level with the likes of
no-talents like Jordan Matthews who does an embarrassingly bad job in
the film's final standoff . Mackenzie also holds her own as the bratty
younger sister pulled into the nightmare.

Some of the visuals are breathtakingly beautiful and some are not so
great. The scenes deep rooted in reality feel almost like a TV movie of
the week while some of the visual effects scenes feel like a major
motion picture.

The strongest consistency this film has is the pacing. It never tends
to let you down and picks up pace quite quickly in the third act.

Some of the scenes are very well directed while others are lacking.
Since this was also his first movie, I might assume that Brian A.
Metcalf might not fall into the same trappings again. I will state that
the film had more of a story than I had originally expected and if only
the acting had been better, the characters might had been more
believable. I actually feel that writer/director Brian A. Metcalf might
have had a little cult gem had he worked with stronger actors as he
does have quite a unique and stylized vision, i.e. the sunrays that
seem to overtake this film and constant movement of background bats and
crows. His dialogue needed some polishing but again, had he worked with
more talented actors, they might have been able to pull it off more
convincingly. This was the case with Brad who by far had the most
elaborate lines in the film and pulled them off with such ease. As
director James Cameron says, choosing the right actor is by far one of
the most important tasks in a film because once you have them, you're
stuck with them. I would like to see how another film by Brian would
turn out given a better budget, stronger cast and crew. But Brian is
not off the hook so easily as some of the scenes felt there was a lack
of coverage. The kitchen scene tends to show the most.

Costuming was terrible and the costumer, Elizabeth Jett should be quite
embarrassed about the poor job she did, showing her extreme lack of
talent and vision. Same can be said for some of the creature makeup
effects. Lighting on the other hand was very nicely tackled. There are
so many independent films where you can't see a thing at night due to
lack of experienced DPs or budget constraints. I could at least see
every scene with a decent amount of detail in the dark and that is
becoming a rarity these days with independents.

I understand that dealing with the independent world, there are many
challenges foreseen and unforeseen. As a person who works mainly with
the independent film world, I get a lot of the problems that happen. I
do feel many of these mistakes could have been avoided had proper
planning been in place, again I revert back to the acting. All
considering, for a low budget indie film, Fading of the Cries seems to
be a strong step above other independents, namely the production values
and locations. I would recommend this film only if you can get past the
bad acting and have nothing better to do. Overall it turns out to be a
fun but not overly memorable film.

I give it 5 1/2 out of 10 stars, only with the consideration it was an
independent film.

TagsTV
Malice in Wonderland
Even the Rain