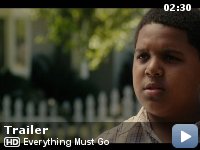 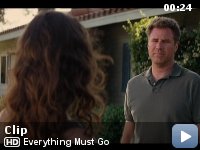 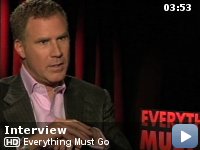 When an alcoholic relapses, causing him to lose his wife and his job, he holds a yard sale on his front lawn in an attempt to start over. A new neighbor might be the key to his return to form.

Storyline
After Nick is fired from his sales job, mostly because of his penchant for alcohol, he comes home and finds that his wife has kicked him and all of his stuff out of the house and onto the front lawn. He is pretty intent on just sitting in his chair, drinking beer, on the lawn. His cop friend, Frank Garcia, thinks he should at least pretend to have a yard sale to make it legal. He slowly starts making friends with a neighborhood kid who needs something to do, and a pregnant wife who has just moved in across the street, and Nick finds himself moving on and selling all his stuff.

Taglines:
Lost is a good place to find yourself

The movie is based on the short story "Why Don't You Dance?" by Raymond Carver – an American author and poet. Director Dan Rush asked permission of Mr. Carver's widow, Tess Gallagher, before extending the story and adding additional characters.

Crew or equipment visible:
Camera and camera operator sitting motionless are reflected for an extended length of time in the glass shower door in Nick's master bathroom (lower left of frame). Scene occurs toward the end of the film, after Nick is provided keys to new locks and regains access to his home.

Frank Garcia:
Do you know what the rate of success is for marriage when one person sobers up but the other one doesn't?

Nick Halsey:
Is is higher than the suicide rate of cops?

Best one I've seen all year


I caught this at the London Film Festival and thought it was the best
film I'd seen all year, or in quite a few years, for that matter,
though I've yet to see Social Network. I'm partial to small, low-key
movies where you have to kind of fill in the blanks for yourself. This
is one of those movies, and I like its honest approach, refusing to
ingratiate itself with potential audiences that like their dramas
"gut-wrenching" and "captivating" (translation: over-acted and on the
nose).


The cast is great, Will Ferrell is just spot-on, as good as I've ever
seen him, including Stranger Than Fiction (well, maybe he'll never top
Ron Burgundy, which is pure genius, but this is a whole different
thing, obviously): funny, moving, serious… And yet he does very
little, and the rest of the cast follow his lead: they just inhabit
these characters and let the writing do its job. There are no big,
Oscar-bait turns in this film, despite its boasting an "award-friendly"
theme, so to speak. There are just these small, honest gestures that
speak volumes for themselves. There's no need to amp them up over the
top with a sappy score, huge fights, people falling apart, crying and
screaming… The film successfully takes it down a notch, and I for one
appreciate that.

To sum up, it was fresh, honest, funny, moving. I think its humanity
will connect with people who are willing to seek this out, and I think
they'll be pleasantly surprised if they do.

Trivia side note: In the print that was screened at the London Film
Festival, Will Ferrell's character was called Nick Porter in the end
credits. That was the character's original name, but apparently they
couldn't clear it because there was a Nick Porter living in the area,
where they were literally about to start shooting that day, or the
next. So they had to consider a long list of names before Halsey was
finally approved, but they didn't have time to change it in the credits
in time for the festival release. This according to writer/director Dan
Rush, who was there for a Q&A.