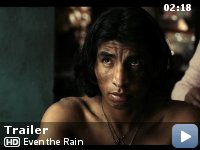 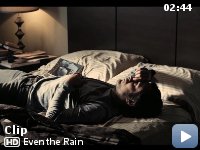 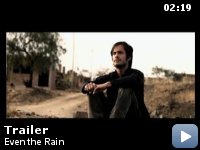 As a director and his crew shoot a controversial film about Christopher Columbus in Cochabamba, Bolivia, local people rise up against plans to privatize the water supply.

Storyline
Spanish director Sebastián, his executive producer Costa and all his crew are in Bolivia, in the Cochabamba area, to shoot a motion picture about Christopher Columbus, his first explorations and the way the Spaniards treated the Indians at the time. Costa has chosen this place because the budget of the film is tight and here he can hire supernumeraries, local actors and extras on the cheap. Things go more or less smoothly until a conflict erupts over the privatization of the water supply. The trouble is that one of the local actors, is a leading activist in the protest movement.

Taglines:
Spain Conquered the New World for Gold 500 Years Later, Water is Gold Not Much Else has Changed…


It would not be surprising if some day a film school professor chose
'También la lluvia' to illustrate a course about committed pictures,
for this Spanish-Mexican co-production is indeed a model of its kind.

Intelligently written by Paul Laverty (Ken Loach's regular collaborator
since 1996) and competently helmed by Icíar Bollaín (a Spanish actress
turned director and, incidentally, Laverty's life companion), 'También
la lluvia' examines a social and political event that took place in
Bolivia in 2000, the Water War, when an American Water Company tried to
privatize the drinking water service in the town of Corachamba,
implying a tariff raise in an order from 40% to 300%.


To tell his story, the writer could have adopted the committed
filmmaker's standard approach: «display of injustice/negative impact on
the group concerned/reaction of the most
militant/confrontation/resolution of the conflict». Instead, he
imagined the coming of a film crew shooting a movie in the surroundings
of Carachambo, getting involved gradually– and against their will – in
the troubles affecting Corachamba. So do the viewers, who identify with
them without having the feeling they are being manipulated by the
authors.

Such a concept also gives 'También la lluvia' added value, making it
function on several levels. It enables Laverty to: – inform his
audiences about a little known historical event – unveil a hidden
chapter of history (through the subject of the film shot within the
film: the first opponents to the Conquistadores, Jesuits Bartolomé de
las Casas and Antonio de Montesinos) – have the two stories echo each
other and enrich each other – cast a spotlight on Bolivia, a neglected
country, and on its Indian population – depict complex characters (the
more idealistic ones shying away from direct action when confronted to
danger while the more reactionary display unexpected bravery)

Helped by Iciar Bollain's sure-handed direction and by the excellence
of the cast (Gabriel Garcia Bernal as Sébastián, the tormented director
; Luis Tosar as the cynical producer ; Karra Elejalde, impressive as
the provocative star of the film in progress ; and – the revelation of
the film, – the amazing Juan Carlos Aduviri, who inhabits his role as
the Indian actor/activist Daniel), Paul Laverty manages to teach, move
and entertain, while avoiding dogmatism, bias and over-simplification.
Just what he is accused of by the flock of bleating French film
critics.