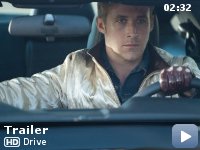 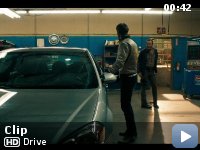 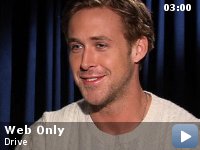 A mysterious Hollywood stuntman, mechanic and getaway driver lands himself in trouble when he helps out his neighbour.

Storyline
A mysterious man who has multiple jobs as a garage mechanic, a Hollywood stuntman and a getaway driver seems to be trying to escape his shady past as he falls for his neighbor – whose husband is in prison and who's looking after her child alone. Meanwhile, his garage mechanic boss is trying to set up a race team using gangland money, which implicates our driver as he is to be used as the race team's main driver. Our hero gets more than he bargained for when he meets the man who is married to the woman he loves.

Taglines:
Some Heroes Are Real

The opening credits song "Nightcall" by Kavinsky, was suggested by editor Mat Newman. The song was also used in
The Lincoln Lawyer, which "Drive" costume designer Erin Benach and actor 'Bryan Cranston' also worked on.

Continuity:
During the chase scene from the pawn shop, Driver swerves to avoid a silver Ford Focus, only for it to change into a blue car as it goes by.

Driver:
[on phone]
There's a hundred-thousand streets in this city. You don't need to know the route. You give me a time and a place, I give you a five minute window. Anything happens in that five minutes and I'm yours. No matter what. Anything happens a minute either side of that and you're on your own. Do you understand?
[pause]

Driver:
Good. And you won't be able to reach me on this phone again.

Why Are Some People So Dumb?


One reviewer here suggested that instead of seeing Drive you should see
what Drive was aspiring to be Layer Cake. Drive is nothing like Layer
Cake nor even tries to be. They have nothing in common, and the comment
is just absurd. It is a far far better film though. From it's title
sequence written in cursive pink (which a ton of idiots just did not
get for some reason) to it's retro soundtrack. It is a picture perfect
reflection of the films from the late 60's, 70's and 80's. If you have
not seen films from this era (i do believe so many reviewers here have
not) you will not entirely get this film.


This is a man with no name film. Instead of horses and cowboys we get
fast muscle cars and ruthless gangsters. Our hero is a man with no
name. He is also a man of very few words that can break out into fits
of extreme violence at any moment to protect those he cares about. We
get no back story to our hero just like the Eastwood pictures, which
makes the film even more effective. He is not your typical Vin Diesel
blabbering idiot action hero. He is an old fashioned action hero. Too
many here did not understand this, and decided this was bad
acting/directing. It is far better to imagine what Gosslings character
has done to arrive at this point, than to be shown in some cheesy flash
back sequence. Albert Brooks (who is just fantastic as usual), Ron
Pearlman, and Bryan Cranston all provide nice contrast to our quiet
hero.

Another reviewer here stated there was no explanation for the second
car at the pawn shop. Well there was. I will not give it away here, but
you will find the answer in the motel sequence. The violence has also
been hated on here, but it is just part of the world he lives in. The
fact that he can be just as cruel as the gangsters adds to the mystery
of his character.

Not one negative review is credible. Unless you were raised on
Transformer and Fast and Furious pictures. Then I guess you would need
more CG, louder music, and bad duologue so you could understand the
film easier. Or maybe you just need more imaginary computerized cars
doing spectacular things on screen to hold your attention. The fact is
this is a fantastic film, filled with great performances, and some of
the best chase sequences since bullet. Be smart see films that matter.