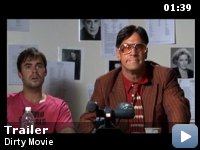 A sketch comedy film with a back story about the awful people behind the awful movie.

Storyline
An outrageous cut-rate producer, Charlie LaRue (Christopher Meloni) is about to fulfill his lifelong dream to make a movie about the most offensive, dirtiest jokes ever told. As Charlie and his filmmaking team hilariously struggle to write a script and assemble their award-winning cast, the movie-within-a-movie emerges with one dirty joke after another. Only one can take the crown for writing the dirtiest joke ever told and Charlie will do whatever he can to be that king.

Producer as a Boy

Narrator:
Give us your tired, your poor, your huddled masses yearning to breathe free – and looking for a government handout, a free lunch, and a dental plan too – The wretched refuse of your teeming shores, Your unwashed yellows and browns and all colors in between. Jews and Gentiles, Muslims and Hindus, and anyone else with funny hats, and we will make fun of them.

New "National Lampoon" movie that is actually funny, if not watched all at once. Movie about nothing but dirty jokes. I say B-


A man with a dream of making a movie with only dirty jokes (Meloni)
goes to the head of National Lampoon (Klein) to get it made. It seems
like forever ago when National Lampoon was in it's glory days (Animal
House, Vacation). The last 10 or so have been pretty bad, this is the
best one they have made since the original "Van Wilder". There is
nothing to this movie but dirty joke after dirty joke acted out, for
example there is a kid playing "little Johnny", etc…. A lot of the
jokes are very offensive but I could not stop laughing. The best way to
watch is in parts…after 20 min it loses its appeal becoming to
repetitive, but I actually found it funny and if you are looking for a
movie you don't have to thing about and just watch, then this is a good
choice. I give it a B-.

Would I watch again? – Yes – With some of my friends who haven't seen
it.