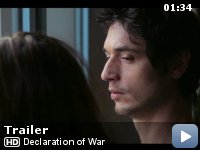 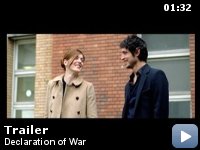 When their young son is diagnosed with a brain tumor, young parents Roméo and Juliette unite in the fight for his survival.

Storyline
Roméo and Juliette are two young actors. They fall in love at first sight, move in together and make a baby. A love story and the founding of a home like millions of others. Except that their little boy, Adam, behaves abnormally. The young parents try hard to persuade themselves that everything is okay but, with the passing of time, they cannot delude themselves anymore : their son has problem. Their fears are unfortunately confirmed : Adam suffers from a malignant brain tumor. From now on, war is declared. A war against illness. A war against Death. A war against despair.

The film takes its inspiration from what actually happened to Valérie Donzelli and Jérémie Elkaïm, whose child fell seriously ill.

Intimate, affecting portrayal of a couple's struggle to survive


This film is the story of a couple whose only son (Adam) is diagnosed
with cancer, but it's by no means a weepie, as from very early in the
film, we learn that Adam pulls through. So, what does this leave us
with? Well, perhaps more interestingly, the movie becomes more about
Roméo (Jérémie Elkaïm) and Juliette's (Valérie Donzelli) struggle to
stay together. With knowledge of Adam's safety in the bank, we can
concentrate on the two main protagonists, and whether they will be able
to survive as a unit.

The film is also scripted by the pair, and directed by Donzelli, and it
must be said, they are a remarkable duo. Their on-screen characters are
very likeably played, if a little saccharine sweet while they fall in
love in the first twenty minutes. However, while some of the early
musical interludes might jar a little, they don't feel entirely out of
place with the scenario. Their relationship forms the beating heart of
this movie though, and they play off each other beautifully, gradually
winning the audience round, and permitting forgiveness for the conceit
of their characters' names!

Bringing a rather sudden end to the romantic beginnings, new baby Adam
arrives on the scene, and all is not rosy in the garden from very early
on. Parents beware, the quarter of an hour that gradually builds up to
Adam's diagnosis is as genuinely affecting a movie sequence as I can
remember from any recent movie outing (and I'm only an uncle!)

And from there it becomes about coping, about managing, and about
survival. As I said, the audience is blessed with the foreknowledge
that the couple do not have, so we're in a privileged position, but as
Roméo and Juliette soldier on, rising to every new challenge and facing
up to every fresh heartbreaking piece of news, you are still right
there with them. Their support networks too, play an important role in
the movie, but really this is the story of Roméo and Juliette's
struggle to survive.

If cinema is about escapism, then 'Declaration of War' will certainly
transport you, placing you right in the middle of this young couple's
lives as they battle with something you wouldn't wish on your worst
enemy.

I can't recommend it highly enough for lovers of French film, or
possibly even just for parents who need a reminder of how lucky they
are. It's bordering on stereotypical, picture-postcard French in the
opening twenty minutes as the two central characters tombent
amoureuses… but kind of suits the mood and is perhaps intentional.
Two excellent central performances make it very watchable, but an
excellent narrative device elevates this story from a traditional
weepie into entirely more interesting territory. A real contender for
the Oscar next March.

TagsFrance
Our Idiot Brother
Hole in One