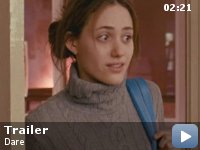 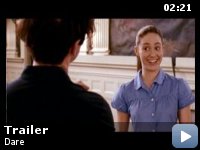 A drama centered around three high school seniors – an aspiring actress, her misfit best friend, and a loner – who become engaged in an intimate and complicated relationship.

Storyline
A drama centered around three high school seniors – an aspiring actress, her misfit best friend, and a loner – who become engaged in an intimate and complicated relationship.

Taglines:
Do something you're afraid of.

Adam Fleming, who plays the detention hall teacher, played the main character of Ben in the short film (also titled "Dare") on which this movie is based.


The movie is split into four acts. The first three tell the story from
the perspective of each of the three main characters, respectively, and
the last act is a kind of epilogue. The film is still linear though,
meaning that while the second act shows a different perspective than
the first, it's still a continuation of the story, rather than a
restart from the beginning. The rest of the acts continue that way.

The first act had me wondering why I was putting myself through what
seemed to be your run-of-the-mill teen drama that might as well have
been an episode of The O.C. rather than a feature film. A typical high
school "good girl" who always played it safe and never got into trouble
starts questioning her value system. She wonders if being "bad" would
benefit her, namely, to give her the life experience she needs in order
to realize her dreams of becoming an actress. Her lifelong platonic
male best friend is worried about her newfound rebelliousness, and he
even feels betrayed by it.

Sometime during the second act is when this film started to deviate
from anything I had expected. When the third act came, the story had
gotten so messed up that I felt ashamed of my initial assumptions. I'm
not even going to hint at what happens, because it might soften the
impact of seeing it unfold on the screen. All I'll say is that it deals
with questioning the seeming obviousness of people's sexuality and
popularity. This turned out to be something of an artsy picture that
didn't focus on typical Hollywood entertainment values. It's "smart",
in that it's not always obvious what exactly is going on, and there's
no voice-over to tell you what the characters are feeling. It's an
original story that makes you think.

Was this movie good? Tough call. The acting is excellent and the
production quality high. Some people might be bored or just confused by
this, due to the strangeness and ambiguity. If you like a deviation now
and then from the norm, you might appreciate it, and if you're into
independent film, definitely give this a shot.

TagsUSA
Megan Is Missing
Something Borrowed