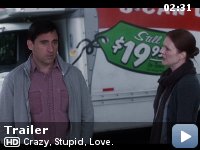 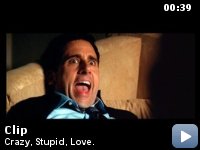 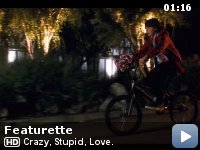 A middle-aged husband's life changes dramatically when his wife asks him for a divorce. He seeks to rediscover his manhood with the help of a new-found friend Jacob, learning to pick up girls at bars.

Storyline
Cal (Steve Carell) and Emily (Julianne Moore) have the perfect life together living the American dream… until Emily asks for a divorce. Now Cal, Mr Husband, has to navigate the single scene with a little help from his professional bachelor friend Jacob Palmer (Ryan Gosling). Make that a lot of help…

Taglines:
This Is Love

Robbie's class is studying the Scarlet Letter. This novel is the basis for Emma Stone's previous movie
Easy A.

Continuity:
After Robbie confesses his love to Jessica in front of a crowd, Jessica pulls him off the scaffold and drags him away for a few steps to speak to him. After Jessica tells Robbie to stop showing his love to her, the next shot does not show the scaffold when Robbie goes back inside the school.

Jessica:
I'm sorry, I should have knocked first.

Robbie:
The thing is, I have a picture of you. I think about you while I'm doing it.


Crazy, Stupid, Love. is one of, if not the best, American romantic
comedies of the past decade. This may come as a shock to some (as it
surely took me aback) but there is no other way to describe it. Going
into an advanced screening of the film earlier this week, I had my
doubts that it would be anything outside of generic. But instead of
tripe, I got one of the most unexpected surprises I have seen all year.


Cal (Steve Carell) and Emily (Julianne Moore) have hit a rough patch in
their long-time marriage, and Emily inadvertently announces to an
entire restaurant that she wants a divorce. Down and depressed, Cal
starts drinking away his sorrows at a local bar, attempting to make
sense of his predicament with anyone who will listen. Jacob (Ryan
Gosling), a professional bachelor, takes notice and makes it his
personal mission to help Cal get over his wife, and become a new man in
the process.

But this is just the main plot thread of the movie. It also follows
Jacob's relationship with the absolutely stunning Hannah (Emma Stone),
throws in a bit of curveball with Emily being romanced by David (Kevin
Bacon), and even has a bit of a focus on Cal's son Robbie (Jonah Bobo)
pining over his older babysitter Jessica (Analeigh Tipton). It may
sound a little packed with threads and too many characters, but Crazy,
Stupid, Love. is able to navigate between each character and couple
with ease. It reminded me a lot of Valentine's Day, and how its main
goal was to depict how different love is for a sizable amount of
couples and singletons. Except it failed miserably at it, and stood out
more as an example of every rom-com stereotype you could imagine.
Thankfully, Crazy, Stupid, Love. takes the higher road and breathes new
life into a stale genre.

While the impeccable cast is more than enough reason why the film
succeeds so well in being an atypical film in the genre, it is the crew
behind-the-scenes that surprises even more. The film is written by Dan
Fogelman, who is best known for a string of Disney films and the
atrocious Fred Claus, and is directed by Glenn Ficarra and John Requa,
who wrote and directed the sadly little seen I Love You Phillip Morris
and wrote the now classic Bad Santa. These three would not be the first
group on men I would turn to for a film like this, but their relative
lack of expertise helps propel the film to the heights it reaches. It
takes darkly hilarious turns in certain instances, plays other
sequences totally unconventionally, play even more out with a
foreboding sense of drama the trailer merely hints at, and trumps more
than its share of genre stereotypes. Weaving between the plots lines,
they make the film feel unique and different from others, all while
giving it an aura of authenticity. While they stumble a bit in the
final act with a series of sitcom-like shockers that border on
ludicrous, they manage to pull off the rare feat of actually making the
audience wonder if these characters will all end up together in the
end, or if they will walk their separate ways; something that is truly
uncommon for this genre.

Acting wise, the film delivers in spades. Carell gives one of his best
performances to date as Cal, moving as swiftly as the script requires
between depression and humiliation, and touching and hilarious. The
film stretches his dramatic muscle more than most, and allows him to
give a performance that does not rely on laughs. The expressions on his
face are just devastating in some sequences, and the wonder in other
scenes is ridiculously hilarious. It is a performance I hope to see him
come back to again, and make even better. Gosling plays against type,
and gives an absolutely hysterical performance. He shines brightly in
every scene, nailing every line and mannerism, while making this
scumbag of a lothario become someone to really care about. He exudes
chemistry and helps make everyone else's performance better. Moore and
Stone also give great performances, easily balancing the humour with
the drama. They are not given nearly as much to do as the guys, but
hold their own on- screen.

The supporting cast does even better. Bobo is phenomenal in his role,
conveying an innocence and naivety that is more mature than I thought
possible. He acts like more of an adult than some of the older cast
does in many instances, and gives the performance a well-rounded other
young actors would be incapable of. Tipton is not nearly as good, but
plays the role of a confused teenager a little better than you would
imagine. Bacon does great in a small turn as does Liza Lapira as
Hannah's best friend. But it is Marisa Tomei who steals the show from
everyone, playing one of Cal's conquests. She is dementedly unhinged
and ridiculously over-the-top, but never falters. Her performance may
be one-note, but it is easily the most memorable thing about the film.

If I hold anything against the film (other than the final act stumble
and the oh-so convenient way one particular scene comes together), it
is that it ended. I know I have harped on how unlike other typical
romantic comedies Crazy, Stupid, Love. is, but there is really no other
way I can rave about it. I easily could have spent more time with these
characters, and pined to find out what happened to each of them after
the final fade out. The incredibly unlikely pair of Ficarra and Requa
has crafted a truly wonderful and hilarious film that is nothing like
what you could have expected watching the trailer. It is bittersweet,
and easily one of my favourite movies of the summer. And this is coming
from someone who loathes almost every single romantic comedy ever
conceived.

TagsUSA
The Art of Getting By
The First Grader