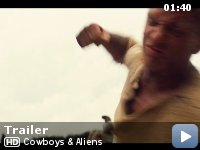 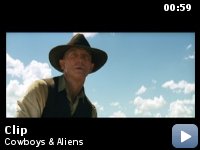 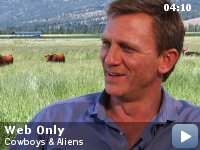 A spaceship arrives in Arizona, 1873, to take over the Earth, starting with the Wild West region. A posse of cowboys and natives are all that stand in their way.

Storyline
The Old West.. where a lone cowboy leads an uprising against a terror from beyond our world. 1873. Arizona Territory. A stranger with no memory of his past stumbles into the hard desert town of Absolution. The only hint to his history is a mysterious shackle that encircles one wrist. What he discovers is that the people of Absolution don't welcome strangers, and nobody makes a move on its streets unless ordered to do so by the iron-fisted Colonel Dolarhyde (Ford). It's a town that lives in fear. But Absolution is about to experience fear it can scarcely comprehend as the desolate city is attacked by marauders from the sky. Screaming down with breathtaking velocity and blinding lights to abduct the helpless one by one, these monsters challenge everything the residents have ever known. Now, the stranger they rejected is their only hope for salvation. As this gunslinger slowly starts to remember who he is and where he's been…

Harrison Ford wanted to go bareheaded in the film and not wear a hat (he is most famous for his performance in Steven Spielberg's Indiana Jones films, where Jones wore a fedora), but since it was a Western film he was convinced to wear a hat. In
American Graffiti , Harrison Ford was asked to cut his hair (to go bareheaded with a period haircut) for the film. He refused, stating that his role was too short, and offered to wear a hat instead.

Wes Claiborne:
[to Jake]
We're riding towards Absolution. You know how far west we are?
[Jake doesn't answer]

Wes Claiborne:
Is there a reason you're not answering my question?

Mose Claiborne:
Look here, Pa. He's got iron on his wrist. He's been shot. Could be done broke out of hoosegow. Might be worth bounty.


The answer to the obvious question hovering around Jon Favreau's latest
action blockbuster is yes, "Cowboys & Aliens" is as ridiculous as the
title sounds. Yet blame doesn't quite belong on Favreau's shoulders or
that of star Daniel Craig or the rest of the cast; rather, the failure
of this alien-infested Western results from the domino effect of the
countless studios and producers who put their faith (and money) in a
concept rather than a story.


To be fair, I know nothing of the Platinum Studios comic by Scott
Mitchell Rosenberg, but it couldn't have been all that good if all the
hottest screenwriters in Hollywood couldn't whip together a plot worth
a damn. The duos behind "Iron Man" and "Star Trek" along with "Lost"
writer Damon Lindelof all took cracks at the screenplay and an earlier
treatment from another pair of "it" writers who wrote next month's
"Conan the Barbarian" was discarded. Frankly, criticism of "Cowboys &
Aliens" all stems from a story with lackluster characters equipped with
cliché motivations. Despite some cool aliens, the action doesn't offer
anything unique enough to counter that we've no reason to care.

Craig stars as Jake Lonergan, a stoic outlaw in Arizona sometime in the
late 19th Century who wakes up with no memory and some metal device on
his wrist. When he arrives in the town of Absolution, the sheriff
discovers he's wanted and attempts to ship him off for a reward. That's
when the aliens attack, bombing the town and roping up locals before
flying off into the night. Lonergan's bracelet activates as a weapon
and suddenly he's the only one capable of defeating these things. He
joins a rescue party led by a grumpy Civil War vet named Dolarhyde
(Harrison Ford) and they all set off to find out what happened to their
loved ones.

The script introduces characters willy-nilly and provides little
satisfactory explanation for anything that happens. The story paints
Lonergan as a quiet badass, but one who has flashes of some woman he
loved. Because his past slowly unravels with nothing revelatory to show
for it as the film wears on, it's tough to care much or even see him as
capable of romantic feelings. Regardless, a woman named Ella (Olivia
Wilde) keeps approaching him with questions he doesn't have the answers
to and she evolves into a love interest for nothing but the sake of it.
Sam Rockwell has little to no bearing on the film other than serving an
example of an otherwise peaceful man who will do whatever it takes to
get his wife back. He's a waste in the role. As for Ford, he just gets
on screen and acts grumpy and impatient. We've seen everyone on board
do so much better. Did these folks not read the script? Probably not
considering the number of drafts alone.

Worst of all, the script thinks we will care; after all, this is
"Cowboys & Frickin' Aliens!" In the final sequence, suddenly all these
supporting characters have little moments together out of seemingly
thin air. What are supposed to be moments in the story tying up
relationship subplots between characters end up as reminders that these
relationships and subplots even existed in the first place.
Consequently, the film's pivotal moments result not in hearts beating,
but eyes rolling.

In fairness, Favreau shows his adeptness from an action perspective
once again in this film. The movie looks good if nothing else with
strong visual effects and a strong concept team behind the aliens and
related technology. The genre experiment generally works from a tonal
perspective, an obstacle that certainly stood in Favreau's path. The
film feels like a Western and one in which aliens could feasibly exist,
so no problems due to identity crisis.

Yet the film never provides a single reason to justify why it had to be
a story about cowboys and aliens. In that sense, the movie results in
nothing more than several studios and producers thinking we'd simply be
interested in a fusion of a shoot-em-up Western with an alien invasion.
All involved failed to ask the one critical question when making a film
based on a concept: "is there a good story here?" No, there's not.
Despite every ounce of you wanting to find a reason to care about what
happens, none arrives. As such, "Cowboys & Aliens" offers watchable but
lifeless entertainment.

Visit my site at http://moviemusereviews.com

TagsUSA
The Art of Getting By
The First Grader