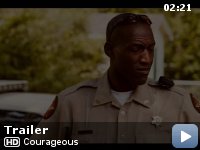 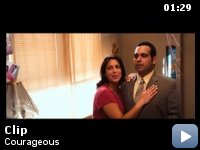 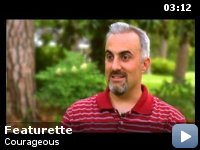 When a tragedy strikes close to home, four police officers struggle with their faith and their roles as husbands and fathers; together they make a decision that will change all of their lives.

Storyline
Four men, one calling: To serve and protect. As law enforcement officers, they face danger every day. Yet when tragedy strikes close to home, these fathers are left wrestling with their hopes, their fears, and their faith. From this struggle will come a decision that changes all of their lives. With action, drama, and humor, the fourth film from Sherwood Pictures embraces God's promise to "turn the hearts of fathers to their children, and the hearts of children to their fathers." Souls will be stirred, and hearts will be challenged to be … courageous!

Taglines:
Four men, one calling: To serve and protect

The girl listed in the cast as "Girl crying at Funeral" is Joy-Anna Duggar, a member of the Duggar family, the famous large Christian family of "17 kids and Counting".

Continuity:
When Shane is removing bags of cocaine from the evidence bag, he is wearing plastic gloves. However, when Adam comes in and catches Shane in the act, Shane stands up and reaches into his pants pocket and tosses the bags on the desk, but he isn't wearing any gloves at all.

Pastor Hunt:
I have heard many people say, who have lost a loved one, that in some ways it is like learning to live with an amputation. You do heal, but you are never the same.


Reality TV is not really real. I mean, I have no friends who've been
stranded on an island or locked in a house (nor, as far as I know, has
that happened to people who don't like me). In contrast, the movie,
Courageous, truly reveals the reality of life. This highly entertaining
film is about the struggles of fatherhood. Which of us guys hasn't
struggled with the boundaries between work and home?


The story centers on a group of law enforcement officers and is filled
with action, outstanding humor and at times, some tough emotional
moments. At the show I attended, everyone cried. They cried at some
tragic moments and at some moments of great relief. At my side was a
good buddy who is a successful business pro and strong family man. He &
I both walked away with some deeper awareness of how we could be better
fathers to our kids and to our brides.

So there are also some distinct learning moments that makes this film
much more than just an escape from reality. How often do you have an
opportunity to take someone to a movie that has trailing impact on your
life? I'll suggest you get some Dads together to watch Courageous and
sit down for a meal afterward to talk about what it showed you were
doing well, or right – and what you could be working on to better build
into your family and their future. Powerfully-told story with an
outstanding cast.