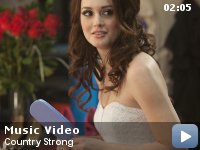 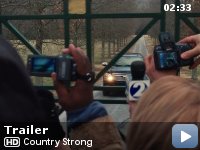 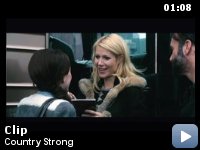 A rising country-music songwriter works with a fallen star to work their way fame, causing romantic complications along the way.

Storyline
A drama centered on a rising country-music songwriter (Hedlund) who sparks with a fallen star (Paltrow). Together, they mount his ascent and her comeback, which leads to romantic complications involving her husband/manager (McGraw) and a beauty queen-turned-singer (Meester).

Taglines:
It doesn't matter where you've been as long as you come back strong.

Tim McGraw, a highly successful country musician, does not sing or perform in the film. The rest of the main cast are the opposite.

Errors in geography:
A billboard referencing Nashville exit 209A is very prominent in the background and they show the Nashville skyline while supposedly in Dallas. They also had real Nashville TV station logos on their microphones.

Chiles Stanton:
Hello James! Hi, Mrs. Kelly! Would you mind signing this for me, please?

Chiles Stanton:
Thank you so much! If you have any advice for a young artist such as myself, I'd love to hear it.

Kelly Canter:
K: Oh, I have some advice.
[writes on the cover of the CD: "Stay away from my husband"]

Chiles Stanton:
And James is being so helpful! I won't sell it on e-Bay or anything, I've just been a fan of yours since I was a little girl.

Kelly Canter:
Thank you. Thank you so much.

Chiles Stanton:
[to James]
This is amazing, James! It's so beautiful, I don't even wanna pee in the toilet! Aaaah!

James Canter:
You didn't think this is for you, did you?

Country Strong: Is this movie country music fans have been waiting for?


“Country Strong”, a surprisingly good film (even if you live in
California and don't happen to like country music). Starring Gwyneth
Paltrow (Iron Man), Tim McGraw (The Blind Side), Garrett Hedlund (TRON:
Legacy) and Leighton Meester (Gossip Girl), “Country Strong” succeeds
in doing exactly what it sets out to do; that is make a dramatic film
about country music that is also entertaining. I know a lot of critics
will not agree with me, but in the midst of the awards season this is
the one film, not nominated for a big time award, that is worth
spending your money on.


Side Note: Oh, and if you're only reading this review to find out if
Gwyneth Paltrow can sing, the answer is yes she can. But if you had
seen “Duets”, then you already knew that she could.

Synopsis: A story that follows fallen country music superstar Kelly
Canter (Paltrow) as she is released from rehab and attempts a comeback
concert. There is also another, and all around better, storyline that
follows the rise of two up and coming country music artists Beau Hutton
and Chiles Stanton (Hedlund and Meester), as they try to find out what
path to take through the harsh and unforgiving world of the country
music industry.

Yes, “Country Strong” may seem a bit to predictable for some and yes,
it does lag a bit in the middle of the film (mostly pertaining to
Paltrow's scenes), but it does redeem itself with a vengeance in the
final 30 minutes of the film. The storyline is really well thought out,
the character development here is potent and the acting (including the
singing), for the most part, is excellent.

Unequivocally the one actor to take note of in this film is Hedlund,
who steals the show with his performance of a country boy/country music
purist. His chemistry on screen with just about everyone including the
microphone is so authentic, that whenever he is on-screen he literally
makes the movie better. Any and all issues I have with this film
surprisingly fall directly on the performance of Paltrow. She plays an
aging alcoholic Country superstar with as much heart as she can muster,
but overall she is sadly uninteresting to watch for most of the film.

Final Thought: “Country Strong” is currently getting raked through the
mud by critics for its simplistic storyline, but let me tell you this:
anyone (and I mean anyone) who is a fan of Country music will
undoubtedly love this film. And even if the Country twang is not your
bang, this is a strong enough drama to keep you in your seat. This is
no “Crazy Heart” (so no nominations to be found here), but “Country
Strong” is still entertaining enough for me to strongly recommend.